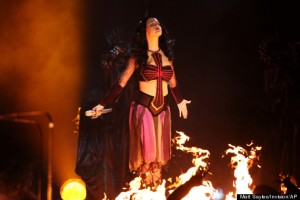 Is this welcome in NY Gov Cuomo?

It seems that after the Nikki Minaj and then Katy Perry’s satanic performances at the Grammys; we are now living in an insane world where occultism and pornography being mainlined prime-time-direct into our homes is acceptable, but the expression of Christian values will get you fired and is not welcome in public. Those of us living in the state of New York just had our Governor reinforce that message! I started to watch a new Don Cheadle TV drama with my wife the other night. I had to leave the room…pure gratuitous in-your-face sexual pornographic sleaze. The good news is, my Liberal wife agreed!

Our cultural rot is so pervasive it is hard to imagine how we can survive it. If we’re not being entertained by the performance of Narcissi, we’re being entertained by his daily march to the cliff. Celebrity self-destruction has become the most popular American spectator sport! I’m not sure which is more pathetic, the lost soul in the arena, or those of us feeding on it.

I had lunch with a Hindu woman a year or so ago to discuss and compare our respective faiths. I learned that their community is just as repulsed and reviled as are we Christians. I suppose ours is a soft persecution in America compared to the deadly hard persecution happening daily around the world!

Is there a “You & I” in Church or State? Are we stakeholders any more at all? If we’re not we should be. If we are we’ve clearly lost our voice! You have to take a moment to watch these two clips. One from Church and the other from State…

If they had told us that “fundamental transformation” meant a divorce from common sense and truth, we might have thought twice…if you and I had ever had a say at all. The total smoke & mirror hologram they are projecting is meant to demoralize and paralyze the you and I! This is true at every level; cultural, environmental, economic and spiritual. The 17 trillion dollar question is, can we detach from the lie and operate within the same paradigm?

The good news is that the answer is a resounding “YES”. The bad news is that it involves “RISK”! For example…if You & I (as stakeholders) were to write a Letter to the Editor condemning Governor Cuomo’s remarks, then we’ve made ourselves a little target. If You & I work to organize a public forum to bring awareness to the ultimate objective of the Central Planners’ “Regionalism, Common Core & Agenda 21” motivating local officials to take a stand, then we’ve made ourselves a big target!

And imagine how the Central Powers would quake, if You & I were to do the exact same thing within the community of our local clergy! 🙂

This is my prayerful wish for You & I…