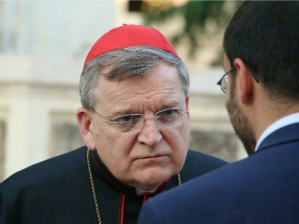 Has anyone besides me noticed how Church and State have become mirror reflections of each other? What is the exact opposite of a separation of Church and State? They become one and the same of course. But how could that be…they have separate missions and represent two distinctly separate authorities…do they not? And yet:

Speak up and Act!

It has been a very interesting week in the world of men. Obama, already at odds with his own military and congress, sends a secret “love letter” , as some have called it, to Iran’s Ayatollah Ali Khamenei…as the Bishops prepare to gather in Baltimore, equally dumbstruck by their leader! The Church is “a ship without a rudder” under Francis according to Cardinal Burke. “Pope Francis is fond of `creating a mess.’ Mission accomplished,” says Bishop Thomas Tobin of Providence. “I think confusion is of the devil. I think the public image that came across was confusion,” said Archbishop Charles Chaput of Philadelphia…

Now how many of you are left scratching your heads wondering whether these shepherds were describing Francis…or Obama? “The head (Burke) of the Vatican’s highest court also told Breitbart Tuesday the Catholic Church risks schism if bishops are seen to “go contrary” to the Church’s established and unchangeable dogmas in the months ahead.” Schism? Schism in the State, schism in the Church…brothers and sisters, welcome to Planet Schism! Ann (Joan of Arc) Barnhardt tends to bang the nail with a bit more forthrightness, but apparently everyone else is too busy…appeasing the nail!

I had a long and flowing response to my take on Thursday’s 6th Circuit ruling which will send same-sex-marriage back to the SCOTUS. It occurred to me as I read the beautiful, thoughtful, kind and compassionate argument for redefining marriage from a woman beautifully inspired by a Course in Miracles, that many of our friends prefer acceptance over forthrightness and coexistence over Truth. From Argentina to Rome, Providence, Philadelphia, Baltimore and Warwick…they have turned Christ into a Hippy!

Sadly, too many of us choose to sit in silent witness to the spiritual version of “Extreme Makeover”. After all, there seems to be more of them and they have corporate sponsors! We choose wishful thinking in place of critical thinking…as the flood waters of consequence rise to nostril level! Hansel and Gretel could’ve followed these breadcrumbs had they been blind, deaf and dumb…without sense of smell!

To every thing there is a season, and a time to every purpose under the heaven:

…a time to Speak up and Act, I swear it’s not too late!