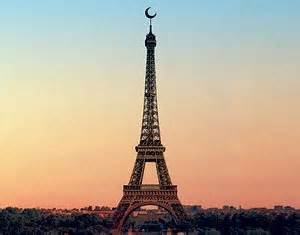 Barbarians at the Gate!

“I would rather die standing than live kneeling.” ~ Charb (Stéphane Charbonnier), Charlie Hebdo before being murdered by Islamic savages…for drawing cartoons.*

“The future must not belong to those who slander the prophet of Islam.” ~ Obama 2012 UN speech

“They’re about as Muslim as I am.” ~ Howard Dean on Paris Terrorists

A sliver of critical thought and 5 minutes with the Koran reveals to the open mind that their precious prophet Muhammad was the original terrorist! Charb’s courageous tribute to Liberty is followed by the sickening words of appeasement and surrender by Dean and Obama. France is toast! While Europe awakens to her greatest nightmare, Dean and Obama seek to lull Americans into oblivious slumber! Cowardly European politicians have ceded their sovereignty to jihad. 71 “No-Go-Zones” in France alone! They have put the people of London, Paris and Brussels on their knees and under the sword of the Caliphate! Madness!! As Freedom Fighter Brigitte Gabriel puts it; “Europe has stage 4 Islamic cancer. The US is at stage 2.”

FACT– We are at war with Islam exactly as we were once at war with Germany. We didn’t burden ourselves with the folly of distinguishing the Nazi German from the good German! Quibbling over the semantics of ISIS v Al Qaeda v Moderate is as pointless as arguing SS v Gestapo v Brown Shirts!! THANK GOD Obama was not the President in 1941! PLEASE DEAR GOD; open America’s eyes to the ugly truth in the Oval Office!

With the barbarians at the gate we are cursed with a President who, as Daniel Greenfield observes, “exists in a truth-free zone.” Here’s what the man who Obama boasts of killing and claims had nothing to do with Islam had to say about Islam:

“Our talks with the infidel West and our conflict with them ultimately revolve around one issue; one that demands our total support, with power and determination, with one voice, and it is: Does Islam, or does it not, force people by the power of the sword to submit to its authority corporeally if not spiritually? Yes. There are only three choices in Islam: [1] either willing submission [conversion]; or [2] payment of the jizya, through physical, though not spiritual, submission to the authority of Islam; or [3] the sword, for it is not right to let him [an infidel] live. The matter is summed up for every person alive: Either submit, or live under the suzerainty of Islam, or die.” –Osama Bin Laden (The Al Qaeda Reader, p. 42)…thanks Ann!

What does all this tell us? Only a fool would rely on politicians to protect themselves and their families!

“What can we do?” ~ Michael Savage to Terror Expert Walid Shoebat after the Paris massacre.

1 – AFDI denounces the crippling rules of engagement under which our soldiers are forced to labor. They should be given the freedom to defend themselves and protect their comrades. This insanity led to the tragic deaths of 22 Navy Seals in one incident!!

2 — AFDI calls for profiling of Muslims at airports and in hiring in professions in which national security and public safety could be compromised. No-brainer!

4 — AFDI calls for surveillance of mosques and regular inspections of mosques in the U.S. and other non-Muslim nations to look for pro-violence materials. Any mosque advocating jihad or any aspects of Sharia that conflict with Constitutional freedoms and protections should be closed. The NYPD was doing this before Comrade de Blasio shut it down!

5 — AFDI calls for curriculum and Islam-related materials in textbooks and museums to describe the Islamic doctrine and history accurately, including its violent doctrines and 1,400-year war against unbelievers. Common Core is Islamic proselytization masquerading as education! This is exactly how they pulled the Sharia wool over European eyes!

6 — AFDI calls for a halt of foreign aid to Islamic nations with Sharia-based constitutions and/or governments. Why should U.S. taxpayers subsidize anything that so abhorrently violates their principles?

7 – AFDI denounces the use of Sharia law in any Western court or nation. How is this complicated? If you wish to live here, follow our laws and assimilate our culture. If you choose Sharia, you choose to leave.

8 – AFDI advocates deportation hearings against non-citizens who promote jihad in our nations. Why would the promotion of Jihad (killing of innocents) not be a “capital offense”?

9 – AFDI calls for an immediate halt of immigration by Muslims into nations that do not currently have a Muslim majority population.

10 — AFDI calls for laws providing that anyone seeking citizenship in the United States should be asked if he or she supports Sharia law, and investigated for ties to pro-Sharia groups. If so, citizenship should not be granted. Agreed! One cannot support Sharia and claim loyalty to our Constitution.

11 – AFDI calls for the cancellation of citizenship or permanent residency status for anyone who leaves the country of his residence to travel for the purpose of engaging in jihad activity, and for the refusal of reentry into his country of residence after that jihad activity. The fact that this hasn’t been done already is disturbing beyond words!

12 — AFDI calls careful investigation of Muslims resident in non-Muslim country who have obtained naturalized citizenship or permanent residency status, to ensure that that status was not obtained under false pretenses. Duh!

13 — AFDI calls for the designation of the following as grounds for immediate deportation: fomenting, plotting, financing, attempting or carrying out jihad attacks; encouraging or threatening or attempting to carry out the punishments Islamic law mandates for apostasy, adultery, blasphemy, fornication or theft; threatening or attempting or carrying out honor murders, forced marriage, underage marriage, female genital mutilation, or polygamy. Again…Capital Crime…trial…conviction…execution.

14 — AFDI calls for the U.S. and other free nations to have jihad, as it is traditionally understood in Islamic jurisprudence to involve warfare against and subjugation of non-Muslims, declared a crime against humanity at the U.N., or to withdraw from the U.N. and have its headquarters moved to a Muslim nation. First we have to reform the UN!

15 – AFDI calls for legislating making illegal the foreign funding of Islamic Studies departments and faculty positions in our universities. Today!

16 – AFDI demands the repeal of U.N. resolution 16/18 and any other resolutions that might limit the freedom of speech. I repeat…#14

17 – AFDI calls for all Muslim chaplains in prisons and the military to be thoroughly vetted, and dismissed if they have ties to any Islamic supremacist group, or if they advocate jihad. Prisons and Mosques are radicalization hotbeds!

18 – AFDI calls for the development of energy policies that will free us from dependence upon oil from Muslim countries. Call it the North Dakota-Keystone Freedom Initiative! 🙂

* What NOT to do! – The Day after the Paris massacre, talk show host Mike Gallagher criticized Charb and Charlie Hebdo for being stupid by provoking a “rabid dog”. The instant he said that I could feel the savage smiling. Satirists do satire for people who love satire just as Conservative talk show hosts do Conservative talk shows for people who love Conservatism. So what will Mike say when the “rabid dog” is offended by his show? Think before you speak Michael…especially when thousands are listening!