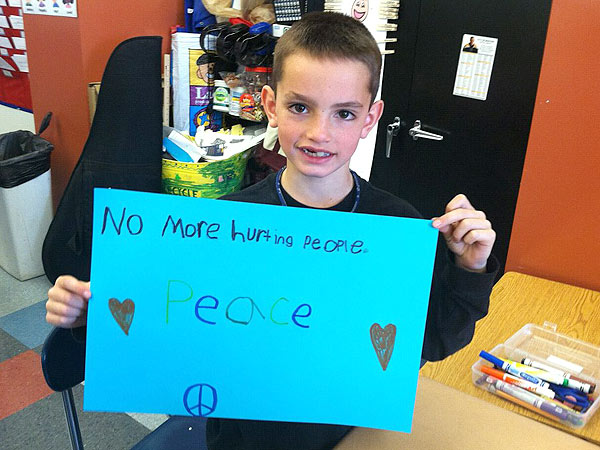 “The hunt is over. The search is done. The terror is over. And justice is won.” ~ The Boston Police

“This is a schizophrenic governing elite we have. They don’t know what they’re doing Brian.”~ Michael Scheuer, a former CIA Operative commenting on the Obama Administration’s support of Al Qaeda rebels in Syria during Brian Kilmeade Fox interview on April 20th in the context of the Jihad in Boston.

I want to preface my comments by expressing my profound appreciation for the men and women in uniform who risk so much for so many, every single day all over America.

The American people have NEVER been so widely and systemically betrayed, deceived and endangered as we are experiencing at this moment in time…on a daily basis! I would love to know the lyricist in blue who was inspired to write the ding-dong diddy above…because it is the worst kind of lie! It’s a lie so bold and shamefully false on it’s very face, that I beg anyone dumb enough to buy in to it to please voluntarily withdraw yourself from the gene pool of humanity NOW…preferably through abstinence! (I am a Christian!)

Welcome to JIHAD America! How does it feel, in this of all places, to have the eloquent Commander-in-Chief who stutters nervously when forced to utter the words TERROR & JIHAD? The terror is over and justice is won?? There have been 20,000 savage acts of ISLAMIC TERROR since 9/11 my friends…and STLL COUNTING! Denial?  It would be exactly as if we were a nation of alcoholics who, instead of checking ourselves into a 30 day program, decided to invest all our money and life savings into a Liquor Store! In other words, our relationship with JIHAD is denial on steroids!

Our BIGGEST problem, and we better damn well face it in a hurry, is one Barack Hussein Obama and the Masters on the other end of his strings! Scheuer is either being kind or intentionally naïve when he uses the word schizophrenic to describe this regime! They know exactly what they’re doing and why. The public on the other hand does not. Their control of general knowledge on so many levels is so powerful that the few of us who are well-informed have all we can do to keep our heads above the complacent flood of “low-information-voters”!

If it were the other way around, comments like Hilary’s “What difference does it make?” referring to the deaths of 4 Americans in Benghazi would have been the end of Clinton’s public service career and impeachment for Obama! Instead they continue to arm the Jihadists while working feverishly to disarm US! Think about the #1 greatest need of all Americans since Obama began his first term, JOBS! And yet his first term was all about Obamacare, and his second term will be all about Guns! And both priorities have and will be forced on the American people at the expense of creating JOBS while destroying our God-given Constitutional Rights! This is Treason in any language…other than low-information-ese!

If you liked the poetic statement credited to the Boston Police above, you will LOVE this poetic irony! The black Mercedes carjacked by the Jihadists had a “Coexistence” bumper sticker!  Now please don’t get me wrong, coexistence is a lovely word. I love the idea of coexistence as I’m sure young 8-year-old Martin Richard, his sister and his mom and dad did. But Martin is dead, his sister has one less leg and may I never know the hell his mom and dad are living through right now because of the people in this world who will ONLY accept coexistence on their terms! The question I have for my fellow Americans is a simple one. Were the Richards well-informed? Or were they about as informed as the families of Newtown, who’ve allowed themselves to become pawns of this regime?

Listening to the Geraldo Radio Show on Friday, I heard a guest Geraldo introduced as a Muslim comedian. He seemed very nice and made a very eloquent appeal to all non-Muslim Americans to please not judge all Muslims based on the abhorrent actions of the few! Here is the response that must be formed in the hearts and inspired to the lips of every single American as a tribute to the three who died in Boston on Patriot’s Day:

HELL NO! Islam has had its chance in America and it has failed! Muslims have had twelve and one half years to get their house in order and they have failed! Islam is no longer welcome in America because the essential tenets of Islam are irreconcilably incompatible with the most essential tenet of Americans…our Constitution! Period! End of Discussion! This would respect the bounds of natural law and common sense, would it not? If the neighborhood bully disrespects and beats the crap out of our kids, do we not reserve the right to not allow the bully into our home?

But herein we have the essence of this very unholy matrimony between the Progressive Statist & Jihadist! At the heart of their binding nuptial agreement is the passionate disdain they share for individual liberty…fueled by their blind-obsessive ambition for total control! While we are all sheep in their eyes; in this environment, the low-information voter represents sheep willing to be sheep! As long as this is so, our decline is assured! By the way, here’s a GREAT new Sheep term- A “Public Safety” Exception to Miranda!  Just SHEAR Me!

What message did we just send the Jihadists and would-be Jihadists by shutting down a major US City because of two punks? http://market-ticker.org/post=219949

There are three people in this short clip. Two are speaking to sheep. One is addressing the lion. http://www.youtube.com/watch?feature=player_embedded&v=dB0lJzNloyA Which one are you?

WE will continue to fall until we begin to rise…

I dedicate this issue to the spirit of Martin Richard and I ask all of you reading these words to stand for Martin, and never give up the fight! I encourage you to get your hands on the latest issue of Whistleblower by visiting www.wnd.com God Bless America!

“The first rule is to keep an untroubled spirit. The second is to look things in the face and know them for what they are. ”