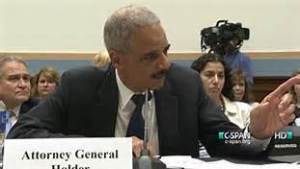 “You don’t want to go there buddy!” ~ Sheriff Holder

“The psychopaths can thrive anywhere that deception is an advantage, but their prime hunting ground is a system in crisis, a controllable chaos lacking a well defined rule of law.” ~ Jesse, Jesse’s Cafe via Ann B!

There was a time and place in this country where stealing a man’s horse would get you to the wrong end of a rope faster than most other crimes. That’s because in most rural parts of the country, a man’s horse was essential to his livelihood and survival. There was something else about horse thieves that’s worth mentioning; they were considered the lowest of the low. Bank and train robbers were noble and daring romantic heroes in comparison. Calling a man a horse thief was about the worst insult you could hurl his way! Reading Jesse’s quote above, I am struck by the uncanny similarity between yesterday’s horse thieves and the psychopaths of today who have taken up residency in our most powerful institutions, where they are thriving indeed…if one considers wiping out the “livelihood and survival” of the rest of the world “thriving”!

We all know the saying “if it walks like a duck”. Please take a moment to review Robert Hare’s psychopathic checklist below and then consider my favorite horse thieves along with their self-incriminating quotes together with their corresponding #’s  as proof they are the greatest threats to individual “livelihood and survival” on the planet today!

1. Look for glib and superficial charm. A psychopath will also put on what professionals refer to as a ‘mask of sanity’ that is likable and pleasant.   It is a thin veneer.

2. Look for a grandiose self perception. Psychopaths will often believe they are smarter or more powerful than they actually are.

3. Watch for a constant need for stimulation. Stillness, quiet and reflection are not things embraced by psychopaths. They need constant entertainment and activity.

4. Determine if there is pathological lying. A psychopath will tell all sorts of lies; little white lies as well as huge stories intended to mislead. Psychopaths are gifted or dull, high functioning or low performing like other people. An untalented psychopath may harm a few; a highly talented psychopath may lay waste to nations. The difference between the psychopath and others lies in their organic lack of conscience and empathy for others. The sociopath is trained to lack empathy and conscience. The psychopath is a natural.

5. Evaluate the level of manipulation. All psychopaths are identified as cunning and able to get people to do things they might not normally do. They can use guilt, force and other methods to manipulate.

6. Look for any feelings of guilt. An absence of any guilt or remorse is a sign of psychopathy.  They will often blame the victim.

7. Consider the level of emotional response a person has. Psychopaths demonstrate shallow emotional reactions to deaths, injuries, trauma or other events that would otherwise cause a deeper response. Other people are satisfaction suppliers, nothing more.

8. Look for a lack of empathy. Psychopaths are callous and have no way of relating to others in non-exploitative ways. They may find a temporary kinship with other psychopaths and sociopaths that is strictly utilitarian and goal-oriented.

9. Psychopaths are often parasitic. They live off other people, emotionally, physically, and financially. Their modus operandi is domination and control.  They will claim to be maligned or misunderstood to gain your sympathy.

11. Psychopaths have unrealistic goals or none at all for the long term. Either there are no goals at all, or they are unattainable and based on the exaggerated sense of one’s own accomplishments and abilities.

12. Psychopaths will often be shockingly impulsive or irresponsible. Their shamelessness knows no bounds. You will ask, what were they thinking? And the answer was, they weren’t because they did not care.

13. A psychopath will not genuinely accept personal responsibility. A psychopath will never admit to being wrong or owning up to mistakes and errors in judgment, except as part of a manipulative ploy.   They will despise and denigrate their victims once they are done with them.  If they have any regret it is that their source of satisfaction supply has ended and they must seek another.

14. Psychopaths lack long term personal relationships. If there have been many short term marriages, broken friendships, purely transactional relationships, the chances the person is a psychopath increase. Watch especially how they treat other people in weaker positions and even animals.

15. Psychopaths are often versatile in their criminality. Psychopaths are able to get away with a lot, and while they might sometimes get caught, the ability to be flexible and adaptable when committing crimes is indicative.

“If you should find yourself in a business or personal relationship with a psychopath, the best advice is seek counseling if you need, obtain assistance if you must, and run if you can.” ~ Jesse

You see, ordinarily I’d say Jesse’s offered some pretty sage advice here. But what do you do when they’re the one’s running, ruling & ruining your life, and the #1 Sheriff has just put your face on the Wanted Poster, stolen your horse…and now he’s coming for your farm?