They Have Turned Our Children Into Jihadists! 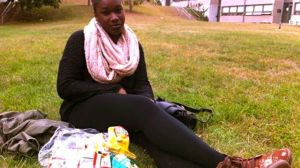 There is a pattern here — and it is the obvious consequence of leftist/Islamic inculcation on university campuses. The youth in this country are incapable of free, rational and critical thought, as their brains have been soaking in a toxic ooze of leftist/Islamic inculcation. A nation of zombies — brutal zombies. ~ Pamela Geller – article linked here

How many of you reading these words have kids in college? Did you happen to notice anything different when they were home for Thanksgiving? Our son was home from Brown with his girl friend. They are both in their sophomore year. From the moment they walked in the door, they were glued to Ferguson as if it were the center of their universe!

This was the weekend I learned what they had “learned”…that “America was a greater threat to the world than ISIS.”

Two weeks ago, young Americans were chanting “Death to the Cops” on the streets of Manhattan. Last weekend, they got what they wanted! I wonder if Brandeis “Student Leader” Khadijah was there. Our son almost went to Brandeis. His best friend is at Brandeis. I wonder if he is one of the students she leads…

She proceeded to claim that “American police forces of today descend from a legacy of slave captives and overseers” and are racist bigots.

The very essence of the United States relies on the social implications of race in which black bodies are deemed as sub-human with little to no access of the rights that are so called applicable to every American citizen. The American police forces of today descend from a legacy of slave captives and overseers whose job was to protect the property (enslaved black bodies) of rich, slave owning capitalists. We must understand that we are not that far removed from this country’s legacy of slavery and that most of our laws are shaped to uphold a system of white supremacy. The Mike Brown case is only a reflection, a repeat and a reminder that this nation rests on the brutality and criminalization of black people and other non-whites. Once we as a nation acknowledge and understand these parallels, only then can we heal collectively from the past.

That was Miss Khadijah in stealth mode being scholarly like. Here she is on twitter with the gloves off in “riot mode”:

what the f–k even IS “non-violence”

I am in riot mode. F–k this f–king country

“She’s a UDR, which means she’s a leader on campus responsible for advising younger students,” a recent Brandeis graduate told TruthRevolt. “Someone with these extremist views shouldn’t have a position of influence at Brandeis.”

…but she does! And the tragic fact is that there are a thousand Miss Khadijahs in hundreds of universities across America who have been quietly fermenting; toxic grapes of wrath, harvested from the villainous vine of treachery and betrayal, bottled by disciples of the devil himself! Are you ready for the grand uncorking of this bourgeoisie-killing Beaujolais Nouveau? Breathe in the robust head-strong zest of young grapes bursting with anger and hatred!

Fermentation is a metabolic process that converts sugar to acids, gases and/or alcohol. It occurs in yeast and bacteria, but also in oxygen-starved muscle cells, as in the case of lactic acid fermentation. Fermentation is also used more broadly to refer to the bulk growth of microorganisms on a growth medium. French microbiologist Louis Pasteur is often remembered for his insights into fermentation and its microbial causes. The science of fermentation is known as zymology.

Fermentation takes place in the lack of oxygen (when the electron transport chain is unusable) and becomes the cell’s primary means of ATP (energy) production.[1] It turns NADH and pyruvate produced in the glycolysis step into NAD+ and various small molecules depending on the type of fermentation (see examples below). In the presence of O2, NADH and pyruvate are used to generate ATP in respiration. This is called oxidative phosphorylation, and it generates much more ATP than glycolysis alone. For that reason, cells generally benefit from avoiding fermentation when oxygen is available. Exceptions include obligate anaerobes, which cannot tolerate oxygen. ~ Wikipedia

I believe every single Progressive Liberal scheme is easily debunked when we take the time to hold it up to the light of natural law. Reading “as their brains have been soaking in a toxic ooze of leftist/Islamic inculcation” made me think of the process of fermentation…converts sugar to acids…in oxygen-starved muscle cells! I don’t believe a better description of our present system of public education and higher learning exists anywhere! We send them our sweet youth…they send back corrosive revolutionaries! Khadijah wants to burn it down baby! It’s much easier to understand how the Khadijah vintage developed when we take a closer look at the nurturing of the young grapes:

Let’s take a closer look at our academic fermentation process:

The oxygen of Life & Honor is removed to allow the acidity of the Ayers and Boudin!

Former NYPD Commissioner Safir says he has “never” seen anything like this before. What he refers to as a “poisonous atmosphere” has been made so by a mayor, a president and his attorney general! I would add, “…with the help of the Professor Churchills, Ayers and Boudins. “Eric Garner and Michael Brown were killed committing crimes. Officers Lie and Ramos were murdered protecting the public.” These young grapes aren’t interested in facts…they have sacrificed way more than sweetness. When they cut the “oxygen” they shut off the critical thinking and subordinated common sense to the collective swill. “Brutal Zombies”…Do you know where your child is? Do you know who your child is?

“To be nobody but yourself in a world which is doing its best night and day to make you like everybody else means to fight the hardest battle any human being can fight and never stop fighting.”

4 Responses to They Have Turned Our Children Into Jihadists!