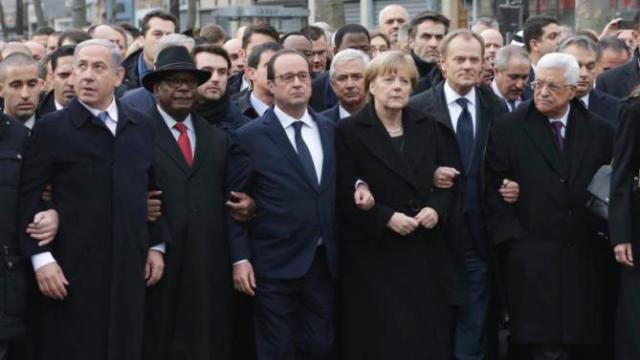 Obama and Biden had “clear schedules” on Sunday! Holder was in Paris and did not show! This was a deliberate no-show-snub of the most symbolically important moment in a world finally uniting against evil…and America’s leaders are nowhere to be seen?

Even the King’s yes-men are crying foul: “I don’t mean this as a criticism of the Obama administration, but as an American, I do wish that we were better represented in this beautiful procession of world leaders.” ~ Jake Tapper

In “…Playtime is Over”, I pleaded with God to “open America’s eyes to the ugly truth in the Oval Office.” He exceeded my prayerful expectations by opening the eyes of the world to the image above! Lupica and Tapper are dyed-in-the-wool Liberals! To “betray America’s values” is an outright betrayal of the American People themselves! How does this make any sense at all? Even the early-American-history-scrubbed mind of the millennial knows that there would have been no Independence Day without the crucial aid, arms and “boots-on-the-ground” from France in our darkest hour! And now in Freedom’s darkest hour on the European Continent, our bowing-apologizing-appeasing Waldo has gone missing? Perhaps his loyalties are elsewhere? There is no other plausible explanation. We have a President who is more concerned about what Al Jazeera says about him in the Arab World than what the New York Times prints about him in ours! America is betrayed! Now that this is established, what’s a Patriot to do?

Then again, the self-evident has been evident to many of us for quite some time: “If Americans were honest with themselves they would acknowledge that the Republic is no more. We now live in a police state. If we do not recognize and resist this development, freedom and prosperity for all Americans will continue to deteriorate. All liberties in America today are under siege.” ~ Ron Paul. Perhaps showing up on the streets of Paris wearing no clothes was more than the Great Emperor could bear…

Here’s what a true leader with freedom-loving “stones” looks like America! Asked by French President Francois Hollande to shrink from the call of liberty and not show up to stand up for freedom with the other world leaders… Bibi Netanyahu boldly shows up anyway! (check out the icy glare of Abbas looking across at Bibi!) What would you like to wager that Obama and Hollande had an understanding? And with France’s surrender of 71 “No-Go-Zones” to the Caliphate, I’ll give you odds that Obama’s masters and Hollande’s masters are one and the same! How long before our stone-less leaders bow to the Caliphate’s No-Go-Zone demands here on American soil you ask? They already have!!

Can you imagine the Tea Party demanding Conservative No-Go-Zones? Have you ever heard a single Conservative pundit call for any such restriction or censorship of any people because of their faith, ethnicity or political beliefs?

Meanwhile, as the media spins the Obama no-show as a matter of “incompetency”, I have to wonder about an administration that goes after the Tea Party as if freedom-loving Conservatives were the greatest threat to America…while refusing to call America’s real enemy by name! How soon before this man’s “incompetence” hits home I wonder…

5 Responses to “The World Unites”…Without America?