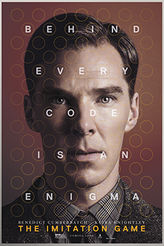 “With love for mankind and hatred of sins.” ~ St. Augustine

Going to the movies used to be about entertainment…but I am beginning to wonder. Maureen Dowd used the term “Artful Falsehood” to describe the movie Selma a few weeks back. This past week my wife and I saw the movie, The Imitation Game. If you haven’t seen the movie and plan to, you may wish to stop reading and bookmark today’s Tune-up until after you’ve seen the movie. Let’s just say that Hollywood has perfected what I would call “Artful Sneakiness”. Good Sunday Morning Dear Friend!

The Imitation Game was a great movie because it was great actors doing great storytelling. And what an amazing story they had to tell. A one hour and fifty three minute story about a man whose mind ended WWll two years earlier than it might have otherwise, saving millions of lives as a result. That, in and of itself, was perhaps the best story of the 2015 Oscar season! But Alan Turing also happened to be a man whose own society rewarded him for saving the world by prosecuting him for his homosexual “deviancy” and forcing him to submit to the chemo-castration therapy that eventually drove him to take his own life…a life that was kept secret for fifty years after the war ended.

Some day when movie-making becomes just about entertainment again, I will enjoy simply being entertained. But as long as its function is to engineer, or should I say re-engineer and entertain me, I shall want to pay closer attention to the experience.  In the case of Selma, we can observe ourselves feeling resentment for our whiteness. With Imitation Game, we are left holding resentment and guilt for our morality. In reality however, King’s blackness was served and even rescued by LBJ’s whiteness…and St. Augustine’s wisdom shines as bright as ever in our love for Cryptanalyst Alan Turing the man.

Was Imitation Game as guilty of “Artful Falsehood” as Selma? Who would know? The point is that when the writer, producer and actor alter the character or angle the story to serve an agenda there is the likelihood of “social engineering” at play behind the scenes. Never underestimate the influence, the sway, the sheer financial power of the Tyrannical Trinity in Hollywood! Are we really naïve and dim-witted enough to think TV shows like Will and Grace, Modern Family and Glee are only about entertainment? If governments, politicians and big corporations can control the news we get, as confirmed by award-winning investigative journalist/author Sharyl Attkisson, think how they are able to control what we believe and feel through the powerful and emotionally-charged medium of television and cinema! Hitler sure as hell knew…

It’s no accident or coincidence that the CEO of Exxon becomes the CEO of the Boy Scouts, and the Boy Scouts in turn, dishonor their oath to God by turning “morally straight” into the acceptance of sodomy as a social norm. The LGBT are more than militant extortionists, they are an affront to God as the Trinity’s ground troops in the war on morality. And you and I had better wake up to the reality that we are not the audience; we are the cast members fighting for our very souls…morally obligated to fight back against the greatest deception of our time!

Wouldn’t it be the irony of all ironies for Alan Turing’s Freedom-saving life to have become the Tyrant’s pawn in death as just another tool to enslave us all? Now there’s a blockbusting story plot if ever there was one! 😉