“We’re the Slaves Who Built the White House”??? 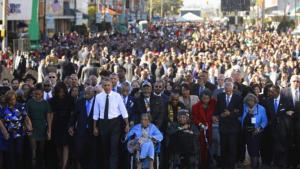 I watched “our” President’s speech in Selma last week and thought to myself, my God we have a “Mad Man” in the White House! If I had  one word to describe the performance and delivery of his speech, it would be unglued, or unhinged!

How eerily strange, bizarre and surreal to watch this man…this operator. The troubles of today, and they are many, meet in him a character of indifference and emotional vacancy. But feed him an opportunity to change the subject of our focus to racism, and he morphs instantly into a carnival-barking black Elvis, firing double-barrel Ebonic-preacher-mode lunacy…as if he were the one who overcame the attack dogs, police batons and fire-hoses to cross that bridge in Selma so many years ago.

And when did American History become Black History? Sadly for us all; when an American President became a Black President with a very un-American agenda! If not for the courage, and sacrifice of many White Americans, and the will of most Americans, King and the rest of them would still be stuck on that bridge. And one Barack Hussein Obama would have never had the opportunity to turn it into a shameless political prop and distraction from the real bonds and shackles awaiting most Americans who will suffer under the weight of his governance…those of us who haven’t sold our souls to fit into his camp of cronies, and bend to the will of his “Progressive” ideology. Their catchy slogan was “Lean Forward”. Their policies have made us “Fall Backwards”! And race relations have…under our first Black President!

The man has no other hand to play and every foreign leader knows it! Bibi Netanyahu would never have bypassed an American President to meet with Congress, and so he didn’t. He side-stepped a thief…an ideological trespassing racist, to meet with the American People. All Obama could do was look small. He is coming undone. The Press may be effective, but they are not magicians (The NYT cropped out George Bush!). All the king’s horses and all the king’s men…

11 Responses to “We’re the Slaves Who Built the White House”???