The Sunday Morning Tune-up ~ The Patience of Job 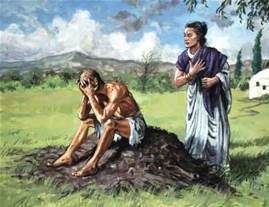 I made the following comment yesterday morning in response to TCT Robert Royal’s insightful take on the seeds of confusion being sown in the Catholic Church: “One needs the fortitude of Job and Abraham combined to hold on in the wake of their mischief.”

One of the Conservative pundits (may have been Savage) made an interesting observation the other day. He singled out the elites and friends of elites whose entire livelihoods are hooked up to the pay-to-play flow from the seething swamp of corruption known as Washington DC, like a giant IV bottle oozing liquid wealth…about to be decimated by the Trump Train! You and I may be a tad more on edge then any prior election year, but these people are in a blood-sweat-panic right now…especially after Friday’s FBI “bombshell”! It’s easy not to feel sorry for them, until you think what have they to hold on to?

I gathered with six friends in prayer yesterday. I thanked God for so truly blessing me over the course of the past year, and appealed with broken heart for His grace and mercy in the lives of so many unbelievers. They seem to be everywhere. They seem to be most of us. What have they to hold on to?

I had breakfast Friday morning with one of my favorite “believer” friends. Responding to a question she had put to me about “finding the time”, I heard the words “I am not of this world” flow from my lips…as if from some third party. It was totally reflexive and instinctive…and probably the most truthful words (I) have ever spoken. But it made me think about where they came from, and how it is I am able to feel blessed in what has been the very worst, most painful year of my entire life.

In the course of morning prayer, I have come to revisit the story of Job. There are so many great stories in the Bible that always seem to provide such useful and timely take-aways, but the story of Job is resonating more powerfully within me than any other times I can recall. Job, in many respects, was very much one of the “elites” I describe in my opening paragraph. He had it all. But he also had something the elites of today, for the most part, are lacking. He had faith in the one true God. He was a true believer. In fact, his faith became the object of a bet between God and Satan in what I believe to be the 2nd greatest tests of faith found in the Bible. The first being Abraham…although Job’s test was one involving remarkable endurance…and the involvement of friends. Actually, who can say? Unlike truth, individual faith is a very subjective experience.

Here’s what I can say with absolute certainty. We are all, believers and unbelievers alike, at the precipice of the greatest test mankind has ever faced…as flatfooted as we’ve ever been. God’s grace and mercy are there for any and all of us with the good sense to reach for it…I know.