The Sunday Morning Tune-up ~ The Feast of St. John and the Cry of God 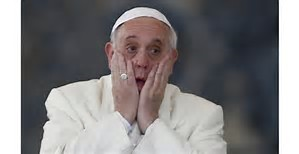 Tears of the Wolf

The Feast of the Beheading of St. John the Baptist was celebrated by Catholics around the world earlier this past week. John, as we know from 1:7, came “to bear witness to the light, that all might believe through him.” He lived his purpose in preparing the way for our salvation from SIN, and sealed his fate and glory for speaking truth in calling out the SIN of Herod Antipas.

“According to the Bible, SIN in its final analysis is not a defect but a defiance, a defiance that means death to the life of God in us.” ~ Oswald Chambers, SIN Seen in Unselfishness

What greater tragedy can there be to us than “death to the life of God in us”? The world was a very dark place when the Son of Man brought His light to it…just as it is now. The “defiance” in Herod Antipas is very much alive in the hearts of those who, like Antipas, have rejected God in favor of the world…and their lust to lord over it. Bezos is Antipas. But we, my brothers and sisters, are blessed with the power of our own discernment in the sacred light of His promise. We know what we know because our hearts are unable to lie to us. As Chambers writes, “Every man has an imperative something within him which makes him say ‘I ought’ even in the most degraded specimens of humanity the ‘ought’ is there.”

And those of us with brains unbleached by the modern world, remain able to see how the agents of that world have transformed SIN to sin to slight to normal to VIRTUE; because “the darkness has not overcome” the light. And it never will. The titular head of the Roman Catholic Church is the modern-day Pharisees. That is the truth. Just as the Pharisees of Jesus’ day turned the people away from the Truth of Christ to the way of the world, Francis deflects the focus of the flock away from the Cry of God, to heed the “The Cry of the Earth”.

Ann Barnhardt led me to John this week, and gave me the idea for this morning’s post by linking him to the St. Augustine quote below. I tell you as surely as I live that just as John sealed his fate by “condemning them and pointing out their malice”, we are sealing ours by not doing so…and it is everywhere we turn. Know this fact: Our “voice crying out in the wilderness” is amplified today by the likes of Hannity, Limbaugh, Levin, Jones, Geller, Barnhardt, and Cernovich…but they are slowly being “disappeared” by the likes of Bezos, Zuckerburg, Dorsey, Wojcicki, and Pichai. What then?

“What is reprehensible, however, is that, while leading good lives themselves and abhorring those of wicked men, some, fearing to offend, shut their eyes to evil deeds instead of condemning them and pointing out their malice. To be sure, the motive behind their tolerance is that they may suffer no hurt in the possession of those temporal goods which virtuous and blameless men may lawfully enjoy; still, there is more self-seeking here than becomes men who are true sojourners in this world and who profess the hope of a home in heaven.” ~ St. Augustine of Hippo, City of God, Book 1

How does the Vicar of Christ on this earth listen so attentively to the world his Lord so clearly disclaimed? In the very same way Jeff Bezos bans the Confederate Flag in favor of the Antifa Guide to “murder and terrorism”. They are head and tail of the same coin! Have you heard the battle cry of the Soros-funded Antifa-orcs of the Pharisees? “No Trump, No Wall, No USA At All!” All they require is your silence…

OR, we stand up and speak out in support of the man who has single-handedly turned both the Left Wing and the Washington/Global Elites into a quivering mass of hyperbolic lunacy…a rotting mass so untethered from reality, and kept afloat by its last remaining torn and tattered race card, we thought we heard them say (just before they went under), “Ben Carson (the black neuro-surgeon) is a white supremacist and dumb as a box of stones”.

Please help Oath Keepers help TEXAS! Every penny goes to the men, women, and children who need it most. God Bless America!

1 Response to The Sunday Morning Tune-up ~ The Feast of St. John and the Cry of God