The Sunday Morning Tune-up ~ Whose Future???

No Future in Sodomy

Thirty years ago, local and global events and outcomes were actually predictable on the basis of a universal reliance on natural laws. This is no longer the case. While many have sadly cut themselves loose, most all Baby-Boomers were blessed with this foundational experience…leaving most Millennials and the rest of the post-Boomers “Un-Moored”.

Today, it is impossible to predict tomorrow on any and all stages, local and/or global. And it’s far worse than the blind leading the blind. We have immoral psychopaths leading a generation of Social Justice Warriors, which is really just another term for lost souls. To them, the regional bank ad “Your future is our future” is just another commercial…oblivious to the hidden reality of the message. Americans have an amazing history of uncertain tomorrows, but we’ve always known who we were facing them with…until today. In Ann’s “Un-Moored” she references a saying I’ve never heard before; “We are the average of the five people we spend the most time with.”  In this disturbing photo of four testosterone-depraved millennial friends, we clearly don’t need to know the fifth, to know all we need to know. 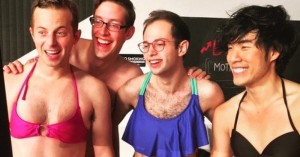 While they distract us with the virtual bread and circus of national and global scandal, the other hand is stealing our homes and neighborhoods out from under us. Besides being the Art of Defending the Indefensible, Liberalism is death. The TD Ad at the top of the page is the portrait of cultural suicide. Think about the subtle transformation of your own home town. Whose future are they talking about? What future do we have without a mother and a father? I hate to break this to my Liberal friends, but there is no future in sodomy. There is no future for any society that wages war against the traditional Judeo-Christian model of marriage and family, while it promotes perversion of the same. And it’s much, much worse. After 30 plus years of their waging war against the natural world, family, and God, they’ve soyed (de-testosteronated) the MAN out of men. Virility? Ask a local cop how many Narcan saves he has made so far this year. There’s “our future”.

Finally, I will leave you with the Left’s “End Game” promoted here in Warwick as the “Community 2gether Visioning Project”. Trust me when I say there is nothing “2gether” or “community” about this Soros-funded UN plot to engineer your property rights straight out from under you…while promising you “Safe Spaces”. I sent the following Letter to the Editor from our own direct experience with the “nicest” but most inherently dishonest and morally emaciated people I have ever met. The local Pravda refused to publish it so I posted as an online comment to the article linked above, and then emailed it to the 1,700 survey participants. I had a number of responses, mostly encouraging from people like Toni.  “THANK YOU CHIP FOR ENLIGHTENING ME. I HAD NO IDEA..”.

The Socialist Re-Engineering of Warwick

Nine months ago, after discovering a retired newcomer to Warwick’s FB post suggesting that Warwick become a Sanctuary Town, I commented “How about a sanctuary for common sense?” He invited me for coffee and a search for common ground. We met and agreed to form the MOM (Meeting Of the Minds) group which became 4 Liberals and 4 Conservatives. Our first hurdle was their refusal to sign a pledge condemning violence in the wake of ANTIFA’s brutal attacks of Trump supporters and Free Speech rallies across the country. The final straw of their deception and dishonesty came when we discovered their role in Community 2000 SIX MONTHS into our relationship and realized they deliberately kept this from us. We showed up to their survey rollout picnic anyway. Did we find a balanced representation of Warwick’s community of 32,000 people? NO…we were 4 Conservatives in a gathering that represented 100% of Warwick’s 2,000 Liberals. They claim 1,700 responses to their community survey…a survey intentionally skewed to limit if not eliminate any responses antithetical to their own. Needless to say, we broke off our relationship with them about six or seven weeks ago.

Then I come across a Thomas Paine presentation at the Albert Wisner Library, moderated by the very same individual who was promoting the idea of Warwick as a Sanctuary Town. So again, we showed up to see how they would handle the legacy of one of America’s more famous founders. The very day of the presentation, I receive an email from the moderator giving me the heads up that he plans to weave our MOM experience into the discussion. I don’t know if he realized I was coming at that point. Again, the room that night was mostly an echo chamber for Warwick’s 2,000. And just as we expected, they remolded Paine into their image as a “Social Justice Warrior”, and would have successfully transformed him into a Liberal had we not been there to point out our Judeo-Christian heritage and ask the moderator questions like, “What would Paine have thought about Political Correctness?” And, with three of the four Conservative MOM members in the room, the moderator chose NOT to bring up MOM at all.

All of this flow of influence came on the heels of a Liberal Warwick historian presenting baseball icon Jackie Robinson as a “Utopian”. A couple of months ago, I described Warwick as the very aspiration of Norman Rockwell. Well, Norman Rockwell’s America didn’t come into being by 2,000 bullying and deceiving 30,000 into their utopia. America became America by 32,000 Americans who knew and understood what it means to be American, and accepted their responsibility to pass the torch accordingly.

Our future is our future. Our families are our families. Our homes are our homes, and our country is our country. ALL of these blessings, along with our rights to defend and protect them come from God. Molon Labe! #MAGA! www.oathkeepers.org

4 Responses to The Sunday Morning Tune-up ~ Whose Future???