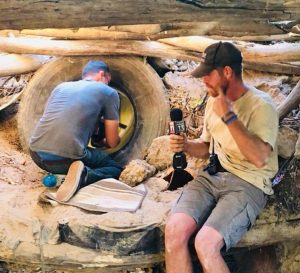 But whoever causes one of these little ones who believe in Me to sin, it would be better for him if a millstone were hung around his neck, and he were drowned in the depth of the sea. ~ Matthew 18:6

On Friday I met with a wonderful active duty NYPD/Warwick mom to discuss, among other things, the Cultural-Marxist Rot destroying the community we both love. She is one of the many local parents waking up to the insidious indoctrination happening all around us. As a mother of a six and eight-year-old, her line in the sand came when Pied Piper Roger Moss and Community 2000 plotted to lead Warwick School children out of school from 10-2pm on a Friday to their “Teach-in” on Gun Control. She told me of local businesses admitting to her that they were pressured to put “Safe Space” stickers in their windows for fear of being branded as haters and bigots for not complying. She shared the awkward moment of having to explain the Rainbow Flag to her young daughter. Today the same devious cast of characters have imported the perfect adorable 11-year-old transgender prop to headline Warwick’s first ever “Pride-in-Sin Parade”…as you can see by the photo. (Do you suppose the tiny crucifix just happened to fall outside the blouse?) A “family-friendly” event they are calling it. “What they are doing to the minds of our kids”, I said to my new New York’s Finest-friend, is so far beyond criminal it eclipses the deeds of the majority of our worst felons.

Where is this coming from?

Globally: The Bilderberg gather in Turin, ignored by MSM. Merkel attempts to unite the world against the USA at the G7 in Quebec. Geert Wilders leads massive protest in UK to free Tommy Robinson, jailed for reporting on Migrant Grooming/Rape Gangs, as newly-married-with-nine-year-old-daughter Anthony Bourdain who was about to go Kanye on the Globalists is found in Paris…suicided?

Locally: Political leaders in Warwick shrug off multiple cases of indoctrination and then commission those responsible to “Vision” our future…When a local religious leader is made aware of the plot, he proposes the church’s “Give Hope Movement” rather than a plan to simply confront those seeking to corrupt, pervert, and destroy the heart of the American Family, as he then (with best and loving intention) attempts to shepherd my focus away from the enemy, and towards the still waters. And then there are the oblivious waters at work where I listen to the young sheep banter on about Lebron James while I try to muster volunteers for the Oath Keepers’ “Operation Child Shield”.

Our world has become one giant Tolkienesque stage. On one side there is Merkel’s Mordor (Globalist Orcs of Saruman), and on the other is the Trump Shire (The Nationalist Ring-bearers). What Trump seeks to liberate, Merkel drags  deeper into the darkness.

Ann Barnhardt captures those of us living in the oblivious waters brilliantly in her “Living in a Bubble”:

Madam, you are the walking personification of the Marxist goal. You are a totally sensuous, self-absorbed person who can only see the world through the prism of your own faux-victimhood, so much so that your self-centered sensuousness even takes precedence over the eternal fates of the souls of your own young children. The last wedge, the wedge between mother and child, has been driven home, and you are the proof of that.

What, in God’s name, will it take?