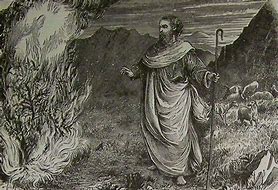 I Am That I Am

A false balance is an abomination to the Lord, but a just weight is His delight. When pride comes, then comes disgrace; but with the humble is wisdom. The integrity of the upright guides them, but the crookedness of the treacherous destroys them. ~ Proverbs 11:1-3

It is so much easier to see God when we understand who God is not. It is so much easier to accept God when we understand where not is, and has been, leading us. During last Sunday’s Oath Keeper fellowship call, I asked if anyone had a suggestion for the Wednesday Prayer & Fast, and Keith responded with “humility” which led us to Proverbs 11:1-3…followed by the week of solid back-to-back nots.

On Tuesday we all woke up to the now famous not encounter on Shelter Island. (Foul Language Alert). On Wednesday morning I woke up to the ultimate not prayer…

By Wednesday afternoon, not was in full stride on the streets in the City of “Brotherly Love”. Oddly, in this week of weeks, I happened to watch the first Rocky movie which was filmed on the same streets…back in 1976…long before not took over. Do you remember “the Neighborhood’s Jukebox” scene in Rocky 2? Quite the stark contrast, eh? Life in this world is a crime scene…20/20 in the rear view, with not’s fingerprints everywhere.

The lesson in the absence of humility is humiliation. Think of society as a balloon. A balloon has to be filled before it can be popped. The American balloon began filling in the sixties, and continued with gusto through the seventies and eighties, soaring ever higher…higher than the Twin Towers, until they suddenly stopped towering, which might have told us something…but didn’t. The best way to control a society grown completely full of itself is through the “snark” of great poppers. And then along came Jon Stewart and Steven Colbert. Fast forward to the present day and what have we learned (via Chris “Fredo” Cuomo)? That not is completely unable to take what it dishes out.

The happiest, healthiest, and safest societies are the ones least full of themselves. We have tragically inflated ourselves into a self-absorbed portrait of depression, anger, and despair. We flood our social media pages with beautiful sunsets and smiley grandkids to convince ourselves otherwise, as we continue inflating ourselves towards our own oblivion. How ironic is it that we have made the streets of our future so dangerous for the grandchildren we love so much? Humility makes the best sheepdogs make the streets safer. Why? Because those of us with less to lose are willing to risk themselves for others.

But if I am made in the image of God, how can I be not?

We have to get to the place about which Jesus talked to the rich young ruler where we are so absolutely empty and poor that we have nothing, and God knows we have nothing, then He can do through us what He likes. Would that we would quickly get rid of all we have, give it away till there is nothing left, then there is a chance for God to pour through in rivers for other people. ~ Oswald Chambers, Empty and Free