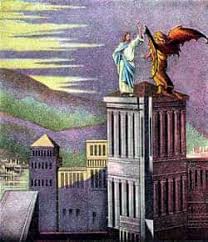 “But it requires us to step into the world to make our presence known, and to literally stand up against evil.”

America’s founders, schooled in a profound philosophical and literary tradition dating back to classical antiquity, understood the fragility of civil peace and the danger of the lustful vengeful mob. Our present leaders, the products of a politicized and failing education system, seem to know nothing of those truths.  Pulling the country back from the abyss will require a recalling of our civilizational inheritance. ~ Heather Mac Donald, Four Months of Unprecedented Malfeasance

Friendship, to me, has never been anything other than the second most sacred relationship any of us can ever have with another person. My best friend all the way back to my Communion at the Wyckoff Reform Church, is my best friend to this day. So, when I look you in the eye and call you my friend, I am giving you all that God gave me to give…most especially His command to love you as He loves us; it puts you in my inner circle. In the world many of us were so fortunate and blessed to grow up in, we were connected to one another with these amazing bonds…like the strongest chain forged from the highest grade of steel, linking families to neighbors to villages, towns, cities, and states across the fruited plains of the most richly blessed nation in the history of the world. That is the world I experienced growing up.  Those who were not so fortunate to have that experience may not resonate with the same feeling I do when they think of these things, but I believe in many ways, they reaped the benefits of those strong bonds.  Some today might argue that those bonds served to lock the people of one race or socio-economic class into an unbreakable network, locking them in, but locking others out.  I believe these bonds locked together a lattice work of many networks that were intended to interact with and strengthen one another, providing a bulwark of security, stability and opportunity for all people.  It was that way then; it can be that way now. The very pinnacle of Western Civilization, WE had attained as a country what the Beatles attained as a band; to the toppermost of the poppermost…as my favorite wordsmith John Lennon dubbed their rise to fortune and fame…all from the bonds of friendship…and God’s good grace.

Now I know what you’re thinking, and you’re exactly right. Civilizations like rock bands (except for the Rolling Stones) and many friendships, don’t last forever. BUT, are we not obligated as stewards and “inheritors” to do our level best to protect the great blessing that was passed to us, so that we can pass it on to those who come after us? Its hard for me to imagine that any of us would wish to go down in history as the ones who dropped the greatest torch ever passed.

I am going to ask you to imagine the following scenario. You and your best friend since childhood have shared this journey called “life” for the past sixty years or so. AND, you’ve shared more than just the journey itself…you’ve shared the same passion for the inheritance Ms. Mac Donald writes about in her quote above. But now something has changed…a very subtle change that has occurred over time causing a major shift in the dynamic of your friendship. Suddenly, it seems, as the inheritance is imperiled your passion has grown while your friend’s passion has gradually waned and turned to indifference. What we once shared as ours is now yours alone to bear. As bad as that sounds, its more complicated than that…and worse I’m afraid. Indifference not only kills passion, it stifles discernment as it enables a willful blindness. The friend you love as God loves you is walking straight into a fire (Evil) that he refuses to see, and there isn’t a blessed thing you can do about it.

QUESTION: Are we afraid to get involved?  Have we given up and think that all is hopeless?   Cato Institute: 62% of Americans are afraid to discuss politics.  77% of conservatives are afraid to discuss. From my perspective, the progressive end of our body politic has taken control of the agenda and is calling the shots. But we are meant to debate ideas and force solutions to be as centric as possible while still effectively solving the problem.  That cannot happen unless BOTH sides engage, respectfully, factually, and I pray, Biblically. Has the left shut down discussion of competing ideas? State of Free Speech and Tolerance in America

For God did not give us a spirit of timidity but a spirit of power of love and self-control. ~ 2 Timothy 1:7 “Those three things can literally change the world. But it requires us to step into the world to make our presence known, and to literally stand up against evil.” ~ Scott Kesterson,  Fear or Fearless

As usual, our Prayer & Fast Wednesday took us to the heart of the matter as Jesus provided the 2nd greatest example of how to stand up against the evil that threatens our ability to recall our civilizational inheritance (Luke 4:1-14), the 1st being Calvary.

Dear Brothers and Sisters in Christ,

The road to tyranny is a slow boil. Our “submission” muscles have proven themselves in excellent condition, while our “resistance” muscles are weak and atrophied. I had a friend assure me last night that “wearing a face mask does not equate to the mark of the beast”, while another one just this morning happily shared the news he had just been given his COVI-Pass permission to leave the country. I asked him if he knew about Revelation and the mark, and he nodded yes. It is coming friends. Will the most passionate supporter of gun rights who sells every gun he owns to feed his family, be able to say no to the mark? Based on what I have observed for the past four months, I would have some serious doubts. Please join us for Prayer & Fast Wednesday tomorrow with prayerful focus on Luke 4:1-14, because I hope to see every single one of you in Heaven.

The position of the Americans is quite exceptional, and it may be believed that no Democratic people will ever be placed in a similar one. ~ Alexis De Tocqueville, 1831

America needs prayer warriors. But the American Exceptionalism that De Tocqueville wrote about in 1831 was achieved precisely because our forefathers were prayer warriors whose faith empowered them to “step into the world, make their presence known, and stand up against the evil” of their day. How have we allowed the strongest chain to become the precarious thread separating our civilizational inheritance from the hands of the lustful vengeful mob? I pray with every last molecular fiber of my being for the Holy Spirit to ride in on the refreshing winds of the Pentecostal promise to restore the passion where its lacking and most desperately needed.

1 Response to The Sunday Morning Tune-up ~ Our Civilizational Inheritance