The Sunday Morning Tune-up ~ America Gets Her 2nd Wind! 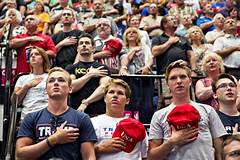 From Sea To Shining Sea

So the Lord said, “If I find in Sodom fifty righteous within the city, then I will spare all the place for their sakes.” ~ Genesis 18:26

I was compelled to put out this Thanksgiving message along with Lincoln’s Thanksgiving Proclamation and Kate Smith’s introduction of God Bless America first thing Thursday morning; I would like to express my heartfelt wishes to my extended American Family…to ALL my brothers and sisters and their families on this wonderful and uniquely American Day of Thanksgiving! I would like you all to know that whichever way this all shakes out, I believe in US…it is in our DNA! God Bless America

This was a reply I received back from a member of what is best described as the Sleeping Church; It is very sad to say that we live in a country that in the 157 years since the time of Lincoln’s Thanksgiving Day proclamation has chosen to reject the God of the Bible. I could only reply, Who chose? I made no such choice. Did you? His official notice of surrender came to me just as I am reading ‘Hearing you will hear and shall not understand, And seeing you will not see and not perceive; For the hearts of this people have grown dull. Their ears are hard of hearing, And their eyes they have closed, Lest they should see with their eyes and hear with their ears, Lest they should understand with their hearts and turn, So that I should heal them,’ from Matthew 13:14-15. How is it that God was ready to spare the city of Sodom for the sake of only ten righteous men after bargaining with Abraham down from fifty, and so many of us are ready to give up a ship with tens of millions of God-fearing souls aboard? The devil’s own fingerprints are all over the answer.

You see my friends, when the shepherds and leaders of the American Church surrendered their moral authority…which is to say His moral authority, and withdrew from the public square, they exchanged discernment and diligence for submission and compliance to become the Sleeping Church. What is sad is the heart-breaking contrast between the American Spirit that was so clearly alive and well in the Kate Smith video, with the dead spirit of surrender, compromise, and capitulation that has transformed Tocqueville’s American Marvel (the American Church) into Tyranny’s Cattle Car.

Night before last, for the second time in the past six months, another sheepdog brother of mine had to take a life…this time to take out a Jihadi terrorist so that 18 American families, including his own, will celebrate joy this Christmas instead of the horror that would have been. I have met some of the most wonderful Americans fighting for our country over the course of the past twelve years. To see those of my own Christian faith so ready to write America off is one of the most disturbing things I have ever witnessed, and its hard to overstate how ashamed it makes me feel.

The week leading up to our 2020 Thanksgiving will go down in the history books as one of the most pivotal moments in American history. This was our P&FW invite that went out this past Tuesday…

Better a dry crust with peace and quiet than a house full of feasting, with strife. ~ Proverbs 17:1

As a nation and the world holds its breath, we gather as an American Family more deeply divided than we may ever have been to celebrate our Thanksgiving, day after tomorrow. My friend and brother Tim sent over this wonderful message from Pastor John McArthur,  “You Are The Light Of The World” , which started with a sad story of a lost boy who might have been found alive had all hands come together sooner.

This followed my morning Maxwell message, “Make Your Home a Haven” from yesterday which struck me as a beautiful chord when combined with McArthur’s message. Please join us for Prayer & Fast Wednesday tomorrow with prayerful focus on Proverbs 17:1 and Matthew 5:14-16. Happy Thanksgiving!

If the devil’s greatest trick is convincing us that he doesn’t exist, then his 2nd greatest trick is convincing us that we aren’t who we are. I have personally witnessed the devil controlling the mind of the Sleeping Church to subordinate feelings to Truth, Mosaic Law to social justice, God’s will to Fauci’s will, and fear of God to fear of man. I have great news for you my friends! Outside the Sleeping Church REAL America is alive and well, by the grace of our loving God.

This was my last communication to an old friend who un-friended me after receiving it yesterday morning: We all grew up in the same America, shared the same basic values, and learned the same rights and wrongs from our parents that were handed down by the generations before them. Matthew 5:13-16 may very well be the most revealing passage in the entire Bible. It best describes what has happened to us between then and now.

“You are the salt of the earth; but if salt has lost its taste, how shall its saltness be restored? It is no longer good for anything except to be thrown out and trodden under foot by men. You are the light of the world. A city set on a hill cannot be hid. Nor do men light a lamp and put it under a bushel, but on a stand, and it gives light to all in the house. Let your light so shine before men, that they may see your good works and give glory to your Father who is in heaven.”

Somewhere along the way my friends took a turn my conscience would not allow me to follow. Some of you went on to lead lives of success and raise beautiful children into a world that was well on its way to becoming one enormously evil prison camp. You were so lost you voted for the corrupt pervert suffering late stage dementia who sold you out to what would have been your future warden. You are so lost you actually believe the man who has forgotten the Preamble and quotes “Palmists” won. Thankfully, as will soon be revealed, God has seen fit to bless us with a second wind. Lost heads will explode.

I’m sorry to hear your mother has Covid (Friend) and will pray for her fast recovery. I don’t believe you voted in our election, but I do believe that if you did you would have voted for those responsible for infecting your mother with it. And (Friend 2)…you need to be a little more concerned with what history will tell your grandkids. Stay on your present course and my fear is that your grandkids will wonder why a stranger fought ten times harder to preserve their freedom than their own grandfather did. If I am proven wrong about any word I’ve just now written, I will follow with a gold-engraved apology.

Truth hurts like hell…before it sets us free. This will come to pass. We have been granted by our most merciful almighty God, our second wind. There is no possible way to explain what I see about to happen, other than to say the “bushel’ that has been over the light for so many, many years is about to be lifted. What I am unable to see is how we will respond.

My fear, as I shared with my church bible study group this past week, was revealed to me in my morning Oswald Chambers read on that same morning. In the meeting with Esau and the marvelous experience of reconciliation with him, Jacob had an expansion of heart, but he did not pay for it afterward in concentration. He lived loosely in the exalted peace of the expanded life, and suddenly a terrible tragedy breaks up the whole thing. ~ Expansion and Concentration (Genesis 33:18; 34:2, 25-29)

The burden I have carried for these past twelve years has set me apart from many I loved and love in painful ways. But it has brought me closer to God and filled me with an inner peace and joy that I never imagined possible. What will happen to our “concentration” when all is revealed and the greatest enemy we’ve ever faced is finally defeated? And please I ask you…pray for those souls who hated us for fighting it! Please God, give us all the concentration of Job when our time comes. Amen.

2 Responses to The Sunday Morning Tune-up ~ America Gets Her 2nd Wind!