What Am I Doing?

The easiest path to take is the path of demoralization…which, by design, puts us squarely on the road to Perdition. Behind every single event, action, newscast, local and global…north, south, east and west…everything is contrived and coordinated by those in power to plant you on this path. Who could have “sympathy for the devil” today? Can you not feel his joy? If you, like me, would prefer to make him frown, then the simplest way to knock him down is to ACT. “Act and God will act!” ~ Joan of Arc

We are living in a world where being confronted with the shocking revelation that the NSA has been spying on EVERYONE including the Pope is only surpassed by the revelation’s darker significance as we witness a four-star general’s fall from grace, a Supreme Court Justice’s surprise ruling in the most significant landmark case in US history, a Republican Governor’s submissive and election-turning courtship of the tyrant…right on up to the Pope’s startling message that Heaven welcomes non-believer’s, and Catholics need to stop behaving like Catholics…as American journalism is corralled into one great Big Chill! Who wouldn’t be demoralized???

My old boss had a great saying. “If it is to be, it is up to me!” Well? Look around…we’ve lost our priests and rabbis. We’ve lost our journalists. We’re losing our flag officers…What’s left? You and Me…that’s what’s left! Which means; you and I must be our own shepherds, pick up our own pens, carry our own flags and bear our own arms! Look around again…

My old boss had another great saying that has served me well, working in a commission-based business for the past twenty years. He warned us about “giving ourselves a head-fake” which he derived from his college football days. What he was referring to was how easy it is to convince ourselves of something that isn’t so. We can go through the motions of “work” by getting dressed every Monday morning, kissing the wife and heading to the office, where we move some things around on our desks and sit in front of our computer until 5pm. But if we haven’t made prospecting calls, booked appointments or closed deals, we haven’t really “worked”! 🙂

note– Atheists, Secularists & Humanists…I guess all the “ist’s” can skip Part I

Regarding the pens, flags and arms…what we’re really talking about would make Ben Franklin beam with pride from his grave! What we are REALLY talking about is a level of Citizen Activism that is no less than our sacred duty and obligation to one another! Here are some ideas to help foster action in these areas:

* I had a most interesting experience when I went with my friend Clay to give our local Congressman Sean Maloney (Liberal Democrat) a piece of our Conservative minds. When we arrived at his Newburgh office, there was a bit of drama and commotion in the reception area where a rather loud and obstinate woman was bombastically assaulting the staff over the Congressman’s recent vote in favor of the Keystone Pipeline. Standing directly behind her, I heard myself say, “Sounds very commendable to me!”, whereupon she spun around and launched into me…as Clay struggled to contain himself. I simply looked her calmly in the eye and asked, “Do I not have the right to my opinion?” which brought instant fluster and her reply, “Well, I’m not going to stand here and argue with you!” I think Clay was about to bust a rib as the staff were very relieved to have her energy redirected away from them. They ended up giving us a personal red-carpet meeting…as the red-haired Alinskyite huffed and puffed herself out of the office.

1) Radical “Alinskyfied” Progressives are cowards. If they were an animal they would be the jackal because their only courage is found when they are in packs…and even then they will quickly shrivel when singled out…as Breitbart was famous for doing!

2) Don’t assume you have nothing to gain by sitting down with your elected officials just because their political ideology is different from your own. People are people and will generally respond favorably when treated with respect and dignity, no matter who they are.

I guess, most importantly, we need to read our own tea leaves and make our own assessments of what is really happening in our country, in our communities, in our own homes and ACT accordingly…or suffer the consequences of our inaction!

As a fitting close to this Sunday Tune-up, I would draw your attention to an email received by my very favorite activist, and her response:

Why do you write stuff and make videos like that? Why don’t you lay low? If this gets serious you’re going to be in big trouble. You might be in trouble already.”

Because bravery and cowardice are a zero-sum game. When a man cowers, he isn’t just merely shielding himself from danger and nothing more. What he is doing is shirking off on to some other man his share of bravery that justice demands. Because the good German people cowered and failed to stand up and stop what they clearly saw happening in the mid-to-late 1930s, their collective failure in courage cumulated and compounded. Where their failure in courage all eventually ended up was on the shoulders of these guys: 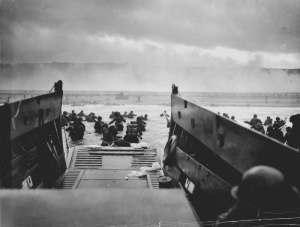 See how that works? Good will always prevail, but there is no limit to the amount of suffering that will be required for that victory to occur. If men stand up early on, the suffering will be minimized because it will be spread over many people. The worst that might happen is that some folks go to bed scared for a while, but widespread bravery will allow good to prevail without much suffering. If, however, there is a decided lack of courage displayed by a large group or society early on in an advance by the powers of evil, that aggregated courage requirement will be borne by a relative few at a later time. The longer this goes on, the worse it will be for the few who have to bear the weight of the cowardice of the broad society.

So, why am I so mouthy right now? Simply put, because I don’t want your son to end up sprawled on some city street with his legs blown off by a Marxist-Islamist-Obamaist RPG bleeding to death because he had to shoulder my personal failure in courage. Got it? That is all.

Reaffirmed in perpetuity,
Ann Barnhardt
From the Van Down By the River