The Ghost of Neville Chamberlain is Haunting Our Church & State! 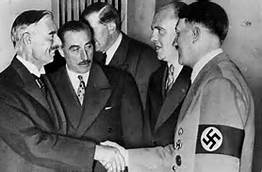 There was a very popular game-show in the sixties called “Password”. Two teams of two players each, usually a celebrity and a…commoner you might say, would compete to see who could guess the secret word the fastest. A member of each team would be given the secret word and would take turns giving their partner’s one-word clues until the partner guessed the word.

If I were a contestant and my word was “Chamberlain”, the clue most of us baby-boomers would instantly offer as the clue would undoubtedly be “appeasement”! I pray that most of you reading this would know that Chamberlain was the British Prime Minister who will be forever remembered as the greatest appeaser in history for playing the lamb to Hitler’s wolf! Well ladies and gentlemen, not only has our old friend returned to our world…he has reincarnated himself in the bodies of both a US President and a Catholic Pope!

I had to laugh, listening to John Kerry’s interview with David Gregory on Meet the Press a week ago this past Sunday. When responding to Gregory questioning Obama’s second “red-line” embarrassment on the world stage…this time facing off with Putin over the Ukraine, Kerry shrugged off Putin’s 21st century actions as a 20th century mentality that would not be tolerated by the rest of us 21st century adults in the room. It was almost as if to say, that not only has Liberalism fixed healthcare through Obamacare, rescued education through Common Core and saved the planet through Solyndra…but they’ve finally rid human nature of her darker demons as a bonus! Only Vlad appears not to have received or read the “do no evil” memo circulated as an addendum to the 21st century Progressive “Square Peg/Round Hole” playbook!

“Good for him,” Dolan replied. “I would have no sense of judgment on him. God bless ya. I don’t think, look, the same Bible that tells us, that teaches us, well about the virtues of chastity and the virtue of fidelity and marriage also tells us not to judge people. So I would say, ‘Bravo.’”

And with that, the #1 Catholic in New York fell into lockstep with the #1 Catholic on planet earth, who’s already in lockstep with the Pied Piper of Fundamental Transformation in the New World Order!  Separation of Church and State? How about a Church and State Tango financed and orchestrated centrally, drawing constituent and parishioner onto one global dance floor where constitutional rights and liturgical appreciation are sacrificed on the strobe-lit altar of collective submission!

Good for him…God Bless ya…Bravo! This would be our Lord’s sentiment towards the unrepentant sodomist as expressed by a representative of the Vicar of Rome himself? And it doesn’t end here!

In July, he (Francis) even went so far as to tell Muslims that he expected their Ramadan observances to “bear abundant spiritual fruit,” when according to the Qur’an, the purpose of Ramadan is to “magnify Allah,” the false god that Catholics readily recognize as the figment of Muhammad’s imagination. http://www.renewamerica.com/columns/verrecchio/130919

Pope Francis urged the West on Friday to intensify dialogue with Islam http://www.huffingtonpost.com/2013/03/22/pope-francis-dialogue-islam_n_2932344.html

The wolf is granted unfettered access to the flock…

While those who attempt to report on it are silenced!

Evil does NOT respect outreach and dialogue anymore than it compromises or negotiates! When our sons and daughters have become strangers to the faith, hypnotized by their smart phones and slaves to their wants and desires…then we know all we need to know. This new dance of Church and State is a dance with the devil himself! Oh, if Chamberlain had it to do over again…