In the Symphony of World Events, the U.N. is Leonard Bernstein! 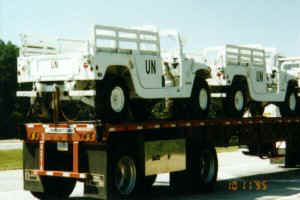 The enemy on American soil!

“The White House feels that events are controlling them.” ~ Chuck Todd responding to MSNBC’s Mike Barnicle’s criticism of Obama for his “mailing it in” lack of involvement in the border crisis.

A week or so ago I saw an article on the internet about the UN intervening in Detroit, and I instantly book-marked a mental red flag. Shortly after that, the next stage of chaos ensued at our southern borders, and I thought we’re being invaded! No stranger to UN-related red flags over the years with Agenda 21, the Small Arms Treaty and the diabolical lunacy of providing cover for Iran by giving them a seat at the Human Rights Council and most recently on the Woman’s Rights Body (which makes as much sense as honoring Jeffrey Dahmer with a seat on the board of the International Vegan Society), naturally my UN Radar is on HIGH ALERT!!

This latest round of Obama’s Alinsky-style chaos, while we are still reeling from the Middle East coming un-glued, Ukraine and Obamacare, reminds me of an interview I recently heard with an author who wrote a Mohammad Ali biography. He was talking about a fight where Ali had knocked Sonny Liston down so hard; he got up and walked back to his corner with his hands by his side…in the middle of the round! When asked about that moment in the fight years later for the book, Liston said that his brain was so scrambled he actually thought he had knocked Ali out and the fight was over!!

We’re punch-drunk! We need to snap out of it!! WE ARE AT WAR!!! But we don’t know it…yet. That begs a real interesting question. How in the world could a conscious and sober people be at war and suffer invasion without realizing it? Here is exactly how…

First came the emasculation of the American Man by the Feminists, and then the silence of the lambs through Political Correctness, the distraction of Pop Culture, and finally our continental divide a la Cloward-Piven…pretty as you please! Is there a free-thinking soul on the planet who believes this sequence of events happened randomly? This has ALL been orchestrated! We have groundwork-laying communications from the White House as they prepared to turn the borders upside down back in January!

Contrary to the heart-tugging images of little Chicano cherubs being fed to us via cable, there are many among the invading hoard who aren’t exactly Boy Scouts…     “Salvadorans heading north through Mexico who were interviewed by The Associated Press last month said there also was fear of the “Sombra Negra,” or “Black Shadow” – groups of masked men in civilian clothes who are believed responsible for extrajudicial killings of teens in gang-controlled neighborhoods. The Salvadoran government denies any involvement in death squads, but says it is investigating the reports.” And then we learn that the very same ISIS that has been liberating men’s heads from their own bodies across the Iraq we liberated (labeled as “too extreme” by Al Qaeda) is now linked to Mexican Drug Cartels!

Williams claimed al-Qaeda would pay the notorious MS-13 street gang between $30,000 and $50,000 for each sleeper agent smuggled into the U.S. from Mexico. The sleepers are also provided with phony identification, most often bogus matricula consular ID cards indistinguishable from Mexico’s official ID, which are accepted in the U.S. to open bank accounts and obtain driver’s licenses. At the time, a Border Patrol supervisor anonymously reported that there was a surge in “OTMS” – other than Mexicans – being caught coming into the U.S. “About one in every 10 that we catch, is from a country like Yemen or Egypt,” he said…And the UN wants us to officially designate them as REFUGEES???

Our world is being turned into a Global Madhouse Symphony ladies and gentleman. And there is only one conductor in it with the motive, the capacity and the capability of sweeping it’s wand from one end to the other, to open the gates of Hell! “We’re living in a Madhouse when we find ourselves arrested for quoting the greatest Englishman who ever lived!”~ Paul Weston, British Freedom Party

You and I are at war with the orchestrators of the very same events that have even victimized our poor hapless President…as Chuck Todd himself admits in the quote above! But we know that Obama and his global peers are far from the innocent victims and blind-sided fools they pretend to be. I’m pretty sure the words “I read about it just like you!” have flowed from as many heads of state in as many languages in recent years…as they follow the maestro’s exquisite cadence and impeccable timing…ruthless shills and black-hearted puppets every single one…whipping the entranced and emasculated, silenced, distracted and divided masses from fear to panic with one False-Flag-Terror after another! It looks like its going to be up to you and me!

So my true-blue, dyed-in-the-wool, Traditional America-loving, patriotic son-of-a-gun…we are in this fox-hole together come hell or high water…staring straight into the enemy’s guns. And the only thing I can think of to say to you right now?

Gotta smoke?…Gotta find me a lighter!

Wanna quit?…Gotta find me a fighter!

Wanna make up?…Can’t seem to get enough of you.

And I’m tellin’all my friends she’s got everything I need,

while she drags me to the darkest side of town.

Oh Delilah, please stay away from my hair.

Don’t let me find ya…can’t let you know that I care.

Gonna find us in the sorry sights of every twisted love,

In the morning I could swear I heard you cryin’

Oh my heart…my heart’s on fire,

Ain’t no pill…gonna quench my desire.

Gotta take love…when it comes to you.

Author’s note– The last track on Wide Awake, Gotta Smoke is much more than it appears. It is the story of you and I coming of age in America. It is about the tension that links conscience with desire, the wisdom that follows and the character it builds. It is about the passion born of true awakening and, as a tip of the hat to the last track on Abby Road, it’s the realization that it is ALL about the love we make! Allowing your country to be overrun with ILLEGAL invaders is not love…it is self-loathing. Period!

1 Response to In the Symphony of World Events, the U.N. is Leonard Bernstein!