Phil Simms ~ The Only Quarterback to Ever Sack Himself! 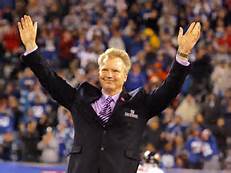 I Am A Gutless Coward!

I grew up in the town of Wyckoff, NJ about twenty minutes west of Giant Stadium and the Meadowlands. We played football every day after school in the field behind the evergreens that lined the parking lot of the Wyckoff  Reformed Church…(I just caught a whiff of the freshly cut grass)! It was the perfect football field! I remember making a leaping tackle once that broke my friend Richie Coughlan’s leg. One of my sisters had a friend named DeeDee who ended up marrying Phil Simms. She seemed nice enough, but my only memory of her was this time we were all at a party when my friend Johnny Magnito accidentally spilled a cup of his Skoal spit on her white dress. Man did she bust a gasket!! I think she would have been less upset if I had tackled her, I swear! We laughed our butts off!! Boy was it a different world back then…

A year or so after that, I was out in the San Fernando Valley in California with another friend of mine and Johnny’s named JR. He and I worked as members of a construction crew run by a man named Jack Licha who we affectionately referred to as the Chief! He was one of the funniest, most quick-witted men I have ever known. He would regale us with jokes every morning while his wife made eggs and bacon and then roast whoever screwed up the day before as part of desert! Trust me; you did NOT want to be on the brunt end of the Chief’s joke skewer!

One day JR and I were on this job together remodeling something or other for one of the Chief’s best customers. He didn’t realize we were in the next room when we overheard him laying it on thick with his customer in the most nauseating butt-kissing suck-up mano a mano soliloquy ever delivered! We imagined him with a collar around his neck on all fours, on a short leash with his customer/master on the other end! We almost fell through the wall laughing! I know I have never laughed so hard so quietly in my life!! On the way back to the shop we mimicked back what we had heard with exaggerated falsetto for affect. Poor Chief turned beet red and nearly drove us into the ditch. Loved that man…and we never found ourselves on the brunt side of his joke skewer again!! I guess you could say we had an understanding. 🙂

You see the point of my telling you this story is that I know we all have to do things from time to time as part of our jobs that we may not like. But I guess I’ve always believed that superior job performance and giving first rate customer service should never require sacrificing our personal dignity or integrity. But that’s exactly what came to mind when Phil Simms got down on all fours for his Masters this week…with one huge difference. The Chief let himself down. The former Big Blue quarterback let his country down! “My very first thought is it will be ‘Washington’ the whole game,” Simms said.

What I find most disturbing about this is that Phil Simms knows exactly what is happening in this country. He knows the name “Redskins” was selected to honor the original coach of the team who was part Native American himself. He knows exactly who Obama is and what Political Correctness is. He knows how damaging his comment was to the cause of freedom. I believe he knowingly sold out to the PC crowd and fed the PC Beast because he thought it was a smart career move. I’d say it was the biggest and most cowardly fumble of his entire life! What say you?

One of the things we learned as kids growing up in Wyckoff is that you never pay a bully because they will only come back for more! I can see it now…Phil Simms making a similar statement of cowardly appeasement to his Masters a few years from now that his very first thought is it will be “New York” the whole game…because tall people do not like the name Giants!  God help us!

3 Responses to Phil Simms ~ The Only Quarterback to Ever Sack Himself!