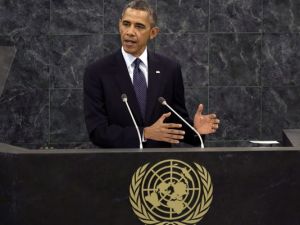 “I will do everything in my power to divert attention from America’s true enemy…so help me Allah!”

“No God condones this terror.” ~ Our Nobel Peace Prize Christian President to the UN General Assembly yesterday after bombing his 7th Arab Country…lovely.

There are so many balls in the air it’s nearly impossible to focus on any one. Securing our borders, ISIS, the economy, concerns of a police state, political scandals, gun control, climate change, and a new war…I’m not sure where Ray Rice, Adrian Peterson and Roger Goodell belong in all of this, but you get my point. What if we were able to see behind it all?

How did the Middle East get so screwed up? How did the Arab Spring become this massive political Rubik’s Cube that has devolved into WWlll? I was fortunate to catch a great interview on Tuesday between Dr. Michael Savage and Palestinian American Walid Shoebat, a former member of both PLO and Muslim Brotherhood who converted to Christianity in 1993. If he is not a qualified expert on the region and all its stakeholders, I’m not sure who would be.

I did not realize previously that the Clintons and former Nat’l Security Advisor for the Carter Administration Zbigniew Brzezinski, financially backed by George Soros, were the chief architects of the Arab Spring. Did you? This little nugget along with three other take-aways really begins to transform the impossible puzzle into the crystal clear clarity of a grand scheme as old as time itself…power and control! The take-aways?

1) The desire for a regional Islamic Caliphate unites every Muslim! It is the one outcome that would place Iran, Saudi Arabia, Turkey and Qatar…Sunni and Shia alike…all on the same team!

2) The “Million Dollar Question” that even Shoebat cannot answer ~ Why is Obama so obsessed with taking out the Assad Regime? It is so blatantly contrary to US interests!

3) The Arab Spring Architects (NWO Elites) and forces behind the Caliphate have something of major significance in common…a disdain for the Judeo-Christian culture! AND, as the UN General Assembly convenes at this very moment, they see Islam as the environmental friendly GREEN Religion!

What a difference a few years make! Remember the schooling Niall Ferguson gave to Brzezinski’s Obama-fawning MSNBC daughter in February of 2011? Talk about 20/20 hindsight! Trust me…worth every precious second of your time! (Assuming you seek to parse sense from nonsense.)

So that’s interesting…Brzezinski’s daughter…and the Clinton’s connection to the Muslim Brotherhood through Hilary’s top aid Huma Abedin…Didn’t Mika and her father team up against Netanyahu on Morning Joe back in July? And didn’t Bill Clinton publically criticize Netanyahu as recently as last week? How does this make any sense? How do you condemn the one lion that stands alone to protect the Pride of Western Civilization from the gathering swell of the barbaric hoard…unless you are the ones feeding the hoard!!!! Boy, someone would have to pay me an awful lot of money…

Come to think of it, there’s something else that doesn’t make any sense at all to me here. The Press did hold Obama accountable for his now famous characterization of ISIS as a “JV squad”. But what they so typically failed to do was commute his “mistake” to “intentional lie” by pointing out that Obama had full intelligence on exactly who ISIS is ONE YEAR prior to his remark! His second intentional lie was made a couple of weeks ago when he said, and I repeat “ISIL is not Islamic”! Why would the President of the United States deliberately mislead his own fellow Americans about the true nature of their greatest threat?

Americans need to come together to stand with the families of Ft. Hood, Benghazi and the Navy Seals to bring these criminals to justice! Obama, the Clintons and all those complicit in our betrayal must be tried for treason and executed! Period! We will never restore America until we find the courage and will to exorcise her demons.