The Obama-Holder-Sharpton Gang Will Light the Ferguson Fuse…No Matter What! 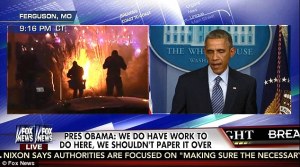 Nero Calls For His Fiddle!

“Hurting others and destroying others is not the answer… No matter what the grand jury decides, I do not want my son’s death to be in vain. I want it to lead to incredible change, positive change, change that makes the St. Louis region better for everyone… Continue to lift your voices with us and let’s work together to heal — to create lasting change for all people regardless of race. We live here together; this is our home. We are strong here united.” ~ Michael Brown Sr.

I was no English language major, but Mr. Brown’s words seem crystal clear to me! And yet the occupying forces dispatched to Ferguson by Barack Obama, Eric Holder and Al Sharpton are coiled and ready to roll over the Brown family and strike if they don’t get their lynching. It’s hard to pick a single aspect of the Obama Presidency more damaging to America than the rest. Some would cite the economy; others might point to the devastating effect this President’s policies have had on our foreign relations. Personally, I would have to single out Race Relations as the most lethal consequence of the Obama Presidency…he has set America’s race clock back 151 years. And he has done so with foresight, malice and intent!

The damage done by the “depraved lawlessness” of the Obama-Holder-Sharpton Gang is unsurpassed in American History. To see the reality of these executive transgressions in any other possible light, after the Professor Gates arrest, the voter intimidation by the New Black Panthers in Philadelphia, the “obstruction” and outright attempt to manipulate justice in the Zimmerman Trial, and now the goading of outside mercenaries to “Stay the Course” in Ferguson, is to defy the gravity of critical thinking!

The actions of this President and his “gang” for the past six years have NOT been the actions of a leader seeking to strengthen and unite; they are the actions of radical revolutionaries seeking to weaken, divide and deliver the spoils to their central planning Masters of the New World Order. The man who swore an oath to defend the Constitution and faithfully execute our laws has forsaken his oath in order to destroy our National Sovereignty! The Daltons, James Gang and Bonnie & Clyde were American Saints in comparison!

How many Sanfords and Fergusons need to be set ablaze before America finally realizes who the real arsons are? “We do have work to do here, we shouldn’t paper it over”???

Obama “pleading for calm” is like the Ebola virus pleading for a cure! “They want a race war. They want us fighting each other…citizens against police” said Oath Keeper President Stewart Rhodes during a recent radio interview. The Oath Keepers have been on the ground in Ferguson to support the rights of the peaceful protesters, remind the police officers of their oaths and stand with them and the shopkeepers against the lawless thugs brought in by the Obama-Holder-Sharpton Gang who, as Rhodes points out in his interview, are positively delighted to see the KKK show up.

Until we summon the courage as individual citizens to step out of our comfort zones and hold the true criminals accountable, the mayhem and lawlessness meter will continue to move deeper and deeper into the red zone! Critical Mass is the ultimate objective of the revolutionary outlaws posing as “legitimate leaders”. It is going to take enormous courage at every level to stop them. We will need true patriots to step up in local law enforcement, all branches of the military, and the clergy…we will need more journalists like Sharyl Attkisson to step into the light to report the Truth. And most of all, we will need all of them to know that you and I have their backs!

4 Responses to The Obama-Holder-Sharpton Gang Will Light the Ferguson Fuse…No Matter What!