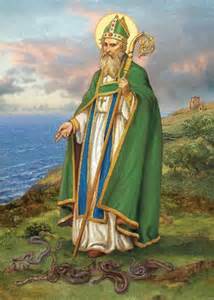 Inviting them back in?

“When the barbarian hordes descended on Europe in the fourth and fiftth centuries, crushing underfoot what was left of cultural antiquity, it looked as if civilization was at an end. Irish monks, in their monasteries and scriptoriums, preserved the writings from antiquity by transcribing them for posterity. They kept the classics alive, safe in their isolation, keeping a secure touchstone to the civilization their faith had transformed. For this reason, the Irish are largely credited by historians with saving civilization.” ~ Michael Voris, “The End of Civilization”

It’s as if mankind drank the Kool-Aid to chase the stupid pill. Obvious is suddenly opaque, and consequence becomes somehow irrelevant. Money can buy lots of things, but it cannot buy morality…which is why morality is more precious than gold. And it is becoming increasingly rare these days, which should be of major concern to all mankind…but it’s not! Because, unlike morality itself, men are easily bought…especially those who’ve stopped thinking beyond their next meal. And yet without morality, we would all be dead or wishing we were. This is why referring to the disastrous vote in Ireland on Friday as the End of Civilization isn’t fatalistic…it’s clear and relevant Truth. The Irish were essentially bribed, with the help of Mr. Feeney’s Atlantic Philanthropies, into killing themselves! Good Sunday Morning Dear Friend!

The road to Perdition is a long and winding one with lots of steps and mile-markers. But could there be any one marker so devastatingly clear in life’s rear view as the one “promulgated” by one Pope Paul Vl in 1969 after the Second Vatican Council. Novus (New) Ordo (Order)…the Woodstock Mass! Watch out for the brown acid man! It’s all good, right? This was the beginning of our turning away…literally. Unlike the Traditional Mass where the Priest faces our Lord Jesus Christ with his back to the parishioners, the New Order turned the Priest around to face the people…literally turning his back on Truth!

It’s one thing to smoke cigarettes or over-eat. We all die eventually; why not enjoy the ride? It’s quite another to kill life itself. It’s a global suicide really, because even the most simplest of minds understands that evil grows in proportion to morality’s decline. It’s not by accident that the Irish are voting morality away, as the Barbarian Hordes are selling Yazidi virgins into slavery! But what is this to me? I don’t know any Yazidis…and so it goes. Life is a chess board…what fool surrenders his queen?

I encourage you to watch the Michael Voris clip. There are some interesting comments posted below the transcript. One very disappointed Irishman who referred to the old saying, “give them an inch and they’ll take a mile” was fortuitously on point. When I invited the new priest at St. Stephens (the very first martyr!) to a meeting with Senator Schumer’s office to discuss the persecution, kidnapping and slaughter of Christians, he responded “That’s Political” as if I had just asked him to dance naked in the square! I know he knows what is coming for him, but he acts as if he has no will. What will be different from this moment to the moment he is forced to marry two men? Absolutely nothing…

We are our own Kings, and while we are blessed with the air to breathe we had better gather our wits about us and study the board…it changes by the minute. Tipping points usually bring quick and drastic change. May God look out for you and yours!