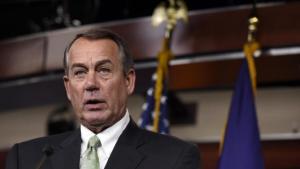 There’s a part of me that loves to watch the masters of deception operate. Their blatant disrespect for intelligence of the American People is truly mind-numbing! How else does one explain their consistent pattern of titling programs like the Patriot Act and the Affordable Care Act to reflect the exact opposite of what they intend? It ALL boils down to trust in my book. How could any rational mind look past the Clintons to believe our government is anything but one enormous crime syndicate? Clinton was the Obama government as Secretary of State…and he owns none of it? How is any of this even possible? No accountability + No consequence = No Legitimacy!

Moreover, as the pre-summer stench of the great Obamacare lie reaches American nostrils…and checkbooks, their cities bankrupt and under mob rule, after six and a half years of our Fast & Furious, Benghazi, Solyndra, VA and IRS Scandal-a-day Obama Regime diet, the man accountable for nothing takes credit for “restoring the US as the most respected country in the world” while David Brooks literally praises Mr. Unaccountability for having “run an amazingly scandal-free administration, not only he himself, but the people around him. He’s chosen people who have been pretty scandal-free.” Did someone slip LSD in my coffee? I’m serious!

That’s a lie akin to a columnist for the Berlin Daily Tribune praising Hitler for being a great friend to the Jewish people in the November 11, 1938 issue…after the “Night of Broken Glass”! David Brooks, who has the gall to call himself a Conservative, IS Goebbels! How much is the Regime paying you David?

Do you realize that 300 Million of us are allowing approximately 550 arrogant slime balls (give or take) to steal our birthright and turn the entire world into their own corporately controlled nightmare? A pinch of “Patriot Act”, a dash of “TPP”, and a flood of “Illegal Immigrants” and America is America no more! While the Patriot Act has merit to the extent of its ability to protect the American people, the TPP has nothing of the sort! And both suffer a complete lack of trust in the authority behind them! Can you imagine how quickly the ISIS reign of terror would end, if the Obama Regime prosecuted its so-called war on terror with a smidgeon of the determination it seems to reserve for its Conservative enemies here at home?

How could the Trans-Pacific Partnership deal be anything other than the ultimate poison pill for the vast majority of Americans? First and foremost, it is being slipped to us by the same crime syndicate posing as our government in much the same way as Alexander Sebastian (Claude Rains) slipped the poison to Alicia Huberman (Ingrid Bergman) in the Hitchcock classic, Notorious…only there is no Cary Grant coming to the rescue!

Our elected representatives, whom I affectionately refer to as arrogant slime balls have been bought and paid for. The interests of America, which is to say all that it means to be American, has been packed up in the night by thieves and sold down the river…leaving a ghostly vacant house no one will be able to recognize. “And yet, when it comes to the TPP, not only is the text of the legislation under lock and key, but the law’s drafters, primarily US corporations, have made it so profoundly secret, that ‘many of the provisions will not only be secret before the vote in the House, but will also be kept secret for four years after the bill is signed.  That means we won’t know what’s in it even after it’s passed.’”

The death knell to America is the Holy Grail to the Globalist-ordered Multi-Nationals! They have been setting the stage for years with trick questions like “How do we raise a global nation?”

The real question is “Why would you?” What does that even mean, to raise a global nation? How about “How do you indoctrinate a population into thinking it’s a global nation?” Notice how the propagandists refer to “an unwelcoming American public” when the truth is that Americans have always embraced immigrants who want to become a part of the American Dream. What we detest and refuse to welcome are those who seek to take everything American with no intention of becoming one! They are not “raising a nation”, they are grooming a herd!

They have declared War on America!

Your thoughts and ideas are subject to approval. They are not your own in a collectivist system. THIS is what real tyranny is.” ~ Brandon Smith