Time to Get the PC Monkey Off Our Back! 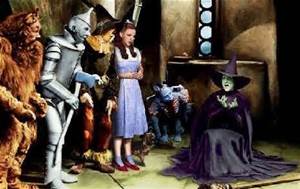 With a simple bucket of water…

Do you remember the scene in the Wizard of Oz when a desperate Dorothy grabbed the bucket of water to save Scare Crow after the Wicked Witch had set him on fire? Do you recall that magical transition from the horror of her friend on fire, to the shock of the Witch melting, to the fear of retribution, to the delight of the Witch’s soldiers…finally freed from the Witch’s tyrannical spell by Dorothy and her bucket of water? My friends, have we not witnessed the exact same magic in Donald Trump (Dorothy) dousing the Political Correctness Crowd (Witch) with the exact same magical effect?

In the late 70’s I worked in my family’s medical supply business in Ho-Ho-Kus, NJ. Our secretary Cathy was the first real feminist I had ever gotten to know personally. I liked her and admired her for her honesty and directness. One day, a representative from Camp Surgical named Larry came into the store to check on our supplies. After offering him a cup of coffee, Cathy yelled out from the back room, “How do you like your coffee Larry?” To which Larry responded, “Like I like my women…hot and black.” My father, David and myself, all knowing Cathy as we did, froze in place starring at Larry with the same helpless terror one feels witnessing the oblivious fawn in the headlights of tractor trailer truck going way too fast to stop!

Poor Larry had no idea of the feminist fury his ill-conceived words had just unleashed, about to bear down on him from the other side of the wall. Had he even the slightest clue, or forewarning, he never would have gotten out of bed! As it was, poor Larry from Camp walked out of our store that day a much smaller and lesser man than the one who sauntered in an hour earlier. I will tell you that he paid a price far heavier than any government regulation or fine could have assessed. And I guaran-double-tee you that he takes his coffee with humility these days…if he takes coffee at all!

You see, not so long ago, when we used to be self-governing, we had a saying, “What goes around comes around.” We were a much stronger and healthier people when we ruled our own lives with respect to the laws of nature. But we have invited a madness into our lives that defies logic and explanation. It’s like we’ve devolved from adults to child-like adolescents filling our minds with sophomoric trash 24/7 a la How I Met Your Mother, Jon Stewart and Jimmy Fallon. The only thing missing is the adult in the room…the parent…and voila! Along comes Parent.gov and their all-powerful “switch behind the woodshed”, Political Correctness…

Step out of line, they’ll come, and they’ll take you away!

In the horror/thriller version of the comedy Meet the Parents.gov, we find a collection of psychopaths, thieves, and hustlers who live by their own rules and preside over an industry of evil that encompasses the darkest deeds, from sex-slave trafficking to the murder of babies for their intact body organs! Worse than this I’m afraid, we’ve empowered these criminals unfit to live among us to rule over us! They’ve rigged our markets, sold our secrets, stolen our jobs, demoralized and brainwashed our children, burdened us with debt we will never be able to repay, and then try to tell us that one of the hardest working and most successful businessmen in America is not qualified to be the nation’s top executive…because he insulted Rosie O’Donnell?

Only a citizenry under a Witches spell of Political Correctness could be conditioned to accept such illogical mind-numbing insanity! The Truth is that it’s an awfully long way to Presidential Tipperary. But an even greater Truth is the fact that you and I aren’t in Kansas anymore!! In fact, we’ve become galaxies removed…when we stop to take off the PC-blinders and think about it.

The August issue of Whistleblower magazine blows open the Planned Parenthood fetal organ-trafficking scandal. On page 44 they feature the portraits of Nazi Adolf Eichmann and Planned Parenthood Dr. Deborah Nucatola in a side-by-side comparison inspired by Hannah Arendt’s 1963 book “Eichmann in Jerusalem: A Report on the Banality of Evil”

Whether or not Donald Trump becomes the 45th President of the United States is likely to be far less significant in the minds of historians, than what he managed to accomplish with a simple bucket of water in the summer of 2015… “Hail to Dorothy, the Wicked Witch is Dead!”

4 Responses to Time to Get the PC Monkey Off Our Back!