The Sunday Morning Tune-up ~ The Inside-out of Fear 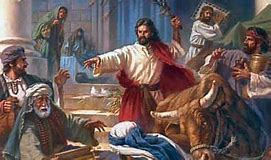 A Time to Fight

“Do not make my Father’s house a house of merchandise!”—the deification of commercial enterprise. Everything of the nature of wrong must go when Jesus Christ begins to cleanse His Father’s house. ~ Oswald Chambers, Passionate Zeal

When you tune in to God, you will find Him to be quite the chatterbox, I can promise you. He speaks to me about our fears this week. He speaks to me through a fearful new Christian friend who lives one of the most fearful lives I’ve ever witnessed. He sees himself living “in the Word”. I see a good man living in fear…fear of non-Christians, fear of breaking bread/eating, fear of partaking and participation, fear of animals coming in the cat door. I am pondering this new friend’s fearful nature as I am on my way to church this past Sunday morning…listening to CBS Sunday Morning. They are doing a feel-good piece using the iconic Swedish band Abba and their “cashless” museum in order to bathe the Globalists’ objective of a cashless society in the softest and sweetest most positive light imaginable. Who better than Abba?

That’s when it hit me like the proverbial ton. We’ve been programmed to fear everything but the true threats…guns, climate, measles, white men, ICE, Alex Jones, Mark Twain, historical monuments, microaggressions, hate speech, FREE SPEECH…the list is endless. While the very same programmers (Tech Giants) who developed the “Dragonfly” social-behavior algorithm for the Communist Chinese, are censoring “dangerous” Conservatives here at home, and wanting us “cashless” as the final nail in our coffin…such a nice soft and cuddly little puppy dog. The devil has turned outside-in, what God created to exist inside-out, by retuning us outside-in.

“Be who God meant you to be and you will set the world on fire.”  This was the first Catherine of Siena quote in last week’s SMTU for very good reason, because it all starts here…until it doesn’t. Yes; John, Paul, George, and Ringo picked up the sounds of Elvis and Chuck Berry transmitting across the pond, but Beatle-mania grew inside-out of the lads from Liverpool. The magic of Motown was extraordinarily inside-out. When Robert Royal writes today, “The digital revolution once looked like sheer magic, bringing the many into close contact, a kind of global unity – until we actually saw the results.”…he is on to something way darker than we imagine. And it’s why “Today’s music ain’t got the same soul.” …as Bob Seger sang how many years ago? Because it is all designed, scripted, signed, sealed, and delivered outside-in, turning Catherine of Siena’s quote into, “Be who (?) meant you to be and you will set yourself and the world on a very different kind of fire.” No wonder so many of our sons and daughters are overdosing and suiciding themselves. They are being programmed away from who they were meant to be! The ultimate post-birth abortion…death of the soul.

Tony Esolen puts it another way in describing the impact of the monument-toppling Twain-killers, “You cannot swim in a reduction of the ocean.  You have to fling out your arms against the real thing.” Read his brilliant take in No Fear Religion.

Because so many of us are living our lives outside-in, we are seeing the opposite of the passionate zeal our Lord displayed in His final days, as he harshly and physically rebuked the money-changers, turning over their tables. The money-changers have gone corporate, global, and digital, as Robert Royal laments. And Silence of the Lambs would be an apt title for today’s church leaders…God’s shepherds…just when their passionate zeal is needed most. There was an encouraging light in our public square yesterday, as my brother Clay spoke very powerfully to this softness in us, while he addressed a crowd of two hundred gathered in Warwick for the very first “Choose Life Parade”…as young Andrew Newman stepped up to deliver an amazing tribute to both his birth parents and the parents who adopted him.

There was another encouraging light I witnessed in one of my old high school class mates who lives in a New Jersey community that is slowly being Islamafied. “I’m going to have to become more involved.”, he wrote. He was responding inside-out to a cancer that has been deliberately injected into our social bloodstream outside-in. Philadelphia school children being radicalized, singing songs about beheading the unbelievers…while something much darker than money-changers would have us fear measles and… the weather!

The woman who introduced me to the inside-out when I was only a child, visited me twice this week in my morning prayer…Happy Mother’s Day Mom. I love you always…

When I kept silent, my bones grew old through my groaning all the day long. ~ Psalm 32:3