The Sunday Morning Tune-up ~ To and From 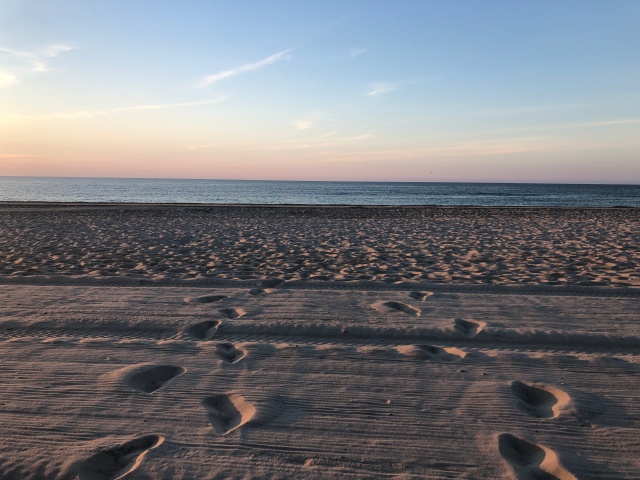 We are tied to the ocean. And when we go back to the sea, whether it is to sail or to watch – we are going back from whence we came. ~ President John F. Kennedy

I came “back to the sea” this past week. The photograph above was taken at a little before 6am Monday morning at Amber Street in Beach Haven, NJ. God truly hugs us here…JFK got it. In fact, JFK got it so much he had to be killed. The entire country of Ireland wept in the streets after the assassination of America’s first Irish-Catholic President. “Don’t let it be forgot that once there was a spot for one brief shining moment, that was known as Camelot.” They knew. We all knew…

The fourth estate, together with ruling class politicians and church shepherds alike, have long since paved over the sentimental memory of Camelot. The “They” about to be completely revealed to us, needed to take him from his throne in both life and death, just as they are now doing with the other King who praised content of character over color of skin. There are no saints or angels in the Great Americans, but we are about to find the Devil in the bad ones. The same They who killed 35 because, With the stroke of a pen, President Kennedy declared that the privately-owned Rothschild Federal Reserve Bank would soon be out of business. The Christian Law Fellowship has exhaustively researched this matter through the Federal Register and Library of Congress, are about to be taken down by 45…who happened to be a very close friend of the son of 35. But I’m getting ahead of the story…

Last week, we learned of our being groomed. In fact, it is quite clear in retrospect, we have all been groomed AWAY from the place the last good king was leading us, flawed as he may well have been, TO a dead sea…the place where the “from whence we came” is only an ocean. They knew, you see, that They could ill afford the possibility of another good king emerging from the American populace…

Days after discovering this revealing article I received an email from the leader of a local Christian Bruderhof Community promoting the book Get Out Now…“The degree to which the public schools have fallen into the intellectual and spiritual dead (sea) of liberalism is one great concern.” This very same morning I came across this article of a Baptist church taking a stand, the day before getting this shocker from NYMetroParents. How long do we accept the unacceptable? Check out the #1 “Family Activity” in YOUR local area! * And the same week I stumble across this gem, mistaking OZY Fest for the Oz-Fest my Trump-loving friend attends after learning that Trump-hating Megan Rapinoe had just accepted an invitation to the former. My friend, to my relief, sent me this interesting description of OZY Fest:

“OZY Fest is not just a music festival. It is a unique gathering of diverse, curious people to dance, laugh, learn and eat with some of the world’s biggest names and boldest thinkers.”

I actually heard President Kennedy speak the words of his quote at the top of the page, and found him speaking of God to my heart. There wasn’t another like him, whom Eldredge himself would call the fully initiated and finished man…until now. Take a look at who some of President Trump’s Scottish ancestors were and what they believed. The niece of the great Hebrides (or Lewis) Revival married President Trump’s father, Fred Trump.

Folks…do you see what almost became of us, and by the grace of God is being slowly exposed and undone? The Christian Law Fellowship, Christian Bruderhof and Baptists finally taking a stand; and not by coincidence…a good king appears from the line of the Scottish Hebrides! This is a massively important hour. Too many of us have chosen to accept the media narrative and its demoralizing intent and count on prayer alone. When, in any hour of the entire span of Western Civilization has the day been won by God’s chosen, on prayer alone? I am pleased to tell you that this past Friday, 16 of God’s chosen (many I’m honored to call friend) stood up to the Devil in Yonkers. This week I went to Him, and I am back from Him with this.

* Katelin Walling is the Editorial Director of NYMetroParents (kwalling@davlermedia.com) Please feel free to recruit your friends to let Ms Walling know that sexualizing our children is not an acceptable “Family & Kids Activity” today or any other day. Period!

1 Response to The Sunday Morning Tune-up ~ To and From