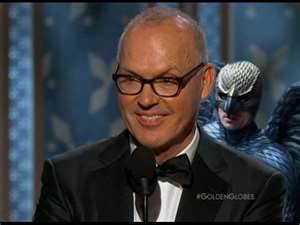 Inspiring us to fly again!

There were two stories over the past couple of weeks that seemed “Tune-up-worthy” to me somehow. Michael Keaton kept it more than real during his Golden Globes acceptance speech by honoring family and crediting the moral values instilled in him by his parents. Contrasting that uplifting moment was the story about news anchor Brian Williams and his experience of watching his daughter’s “raunchy sex scene” in the TV series “Girls”. He said that watching a man “eating his daughter’s ass”, also known as “motor-boating” filled him with “kvelling pride” and “unmitigated joy”. Got the picture? Good Sunday Morning Dear Friend!

The Demoralization of America

The first thing we observe in the Keaton/Williams moments is that one is a reflection on family past, while the other is family devoid of morality literally “in your face” today. The former is the eloquent description of the very substance that has held families together for centuries. Read any hero’s biography and you will find tributaries of morality that fed and nourished the rivers of their lives…only to become the dry and dusty cracked riverbeds we are today. What you could almost hear Keaton longing for has evaporated from our senses.

The “Progressive Privileges” enjoyed by toe-the-line shills acting as news anchors are like jewel-encrusted fairytales seducing the dying populace that unwittingly consumes them. Having dammed the moral tributaries that fed the human spirit, we are slowly bled into serfdom by the gracious hosts of dynasty and nepotism. What you and I might remember, our children will never know in this wretched place.

It is a little like the tyrannical Brits who sought to bleed the Irish out of Ireland; without morality there can be no true conviction…only allegiance to the highest bidder. Without the glue that held us so complete and together, it is far easier to simply pay for our unraveling. Take note of your neighborhoods. While they are building moats around theirs, yours are coming into disarray.

We saw American Sniper last night. Eastwood gave us a brilliant glimpse of what could be called the Last of the Moral Mohegan’s! Chris Kyle’s father told him the story his dad told him about the wolf, the sheep and the sheepdog and Chris became “the legend” by living his life accordingly…while many around him weakened and crumbled.

Hold your own fort! Don’t let them take it from you. “You shall know them by their deeds!” Behind the ever-thinning veneer is their desperate need to demoralize you. They can only do this when we’ve forgotten who we are. Progressive Liberalism’s attempt to characterize good people as bad people for choosing to live a moral life can only become tragic consequence if we allow it. Michael Keaton encouraged me to want to see Birdman. It’s this story about a washed-up actor who seeks to reclaim his old glory. Wouldn’t that be wonderful?